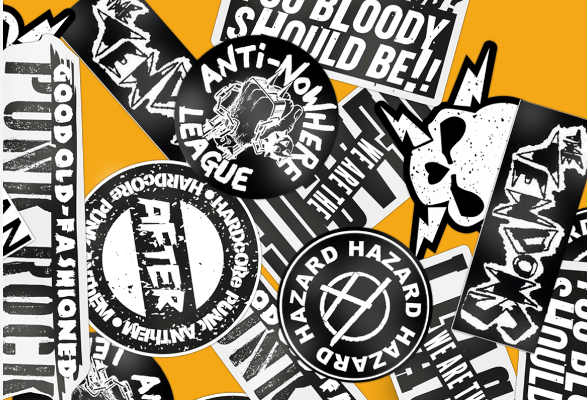 It’s another damp, miserable, rainy Saturday night but rather than staying at home in the warm in front of the TV, I, along with many others, have decided to head down to the recently refurbished and reopened Hat Factory for a night of good old fashioned Punk Rock. I arrive at the venue and am impressed with the job that’s been done in the interim even though it comes across as being a bit too bright, but I’m sure that’s just because it was a fairly dark place before. The bar area is fairly busy with punks from different generations chatting amongst themselves, so after grabbing a beer it’s time to make our way into the main room for tonight’s gig.

The crowd is a bit on the thin side by the time Bedford’s The Tendons, who have been around in some way shape or form since 1987 take to the stage. Being someone who lived in Bedford for 30 plus years I can clearly remember seeing stickers for the band around various parts of the town for years but I only think I saw them a couple of times, at a pub in Bedford called ‘The Bear’. Considering their drummer only joined the band 24 hours previously he pretty much pulls it off while the band tear through a 30 minute set which flies by very quickly with “Fishy Fanny” and “Pub Slag” being particular highlights. They’re well received and a lot of fun; shame the room wasn’t a bit busier for them.

Next up tonight are hometown boys Hazard who despite their youth have been around for quite a while, securing slots at major UK punk festivals for quite some time now. The room has filled up significantly between the bands and Hazard come out of the traps faster than Usain Bolt in an Olympic 100 metre final. Frontman Conor Hussey commands the stage with the kind of confidence and charm you would expect from someone so experienced and the band waste no time in tearing through their set with the phenomenal Sam Tyrrell behind the drum kit providing his metronome perfect timing, fierce beats and thundering drum fills. The crowd is absolutely lapping it up and they finish with a triumphant “Freedom Fighters”. Not impressed? You bloody should be!

Confession time — I first became aware of Anti-Nowhere League through my love of Metallica who covered one of their songs back in the early 90’s, so I was eager to see them up close and personal and I wasn’t disappointed. They’ve been around since 1979 and by the time lead vocalist Animal and the rest of the band take to the stage the room is practically bursting with excitement. As soon as the opening chords of “We Are the League” roar from the amplifiers fans young and old charge towards the front of the stage jumping and moshing left, right and centre as if it’s 1982 all over again. Unleashing Hardcore Punk anthem after Hardcore Punk anthem the band ensure energy levels remain sky high and the fans and band are clearly enjoying themselves, with “Streets of London” and “So What” going down very well. Far too soon it seems the band finish but it’s clear to see from the smiles onstage and in the audience that everyone’s had a great night and, considering the very fair ticket price, you really can’t argue with that. GREAT NIGHT!!!