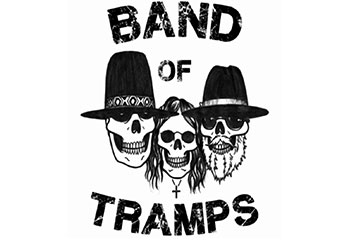 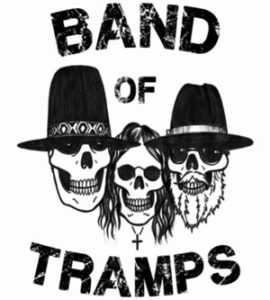 I happened to stumble upon Band Of Tramps by accident one Saturday night in early December during an impromptu visit to the George 2nd, and within hearing two songs I was declaring them one of the best bands I’d seen for a long time. Not only was every member of this three-piece clearly talented, but their actual sound was absolutely spot on – possibly the best I’ve heard in this particular venue. Tonight is the second time I’m seeing Band Of Tramps, and at the end of the night my feelings from seeing them the first time hadn’t changed.

Based in London (apart from the drummer, who lives locally), Band Of Tramps have their feet firmly planted in the blues-rock arena, combining original material with covers that sound like they could be original songs, such is the unique stamp the band place on them. I personally enjoyed the fact that I couldn’t recognise songs I’m familiar with (Little Red Rooster, Cocaine, Hoochie Coochie Man, All Along The Watchtower to name a few) until the vocals came in. And there’s a pleasant surprise in store when their version of Led Zeppelin’s ‘When The Levee Breaks’ turns into an uptempo rock and roll jam halfway through.

Frontman Dave Jackson is a fantastic guitarist, with a Hendrix influence coming through strongly along with traces of Robin Trower. His vocals are effortless and yet full of power and remind me somewhat of Buddy Guy. Bass player Jay Jay and drummer John Kane make up the rhythm section, and the band as a whole are extremely tight. However, there is a looseness and almost care-free attitude about them that creates an intriguing juxtaposition. There’s no sign of a setlist on stage, and it almost feels like you’re watching the band rehearse despite the pub’s audience (which starts small but drastically increases as the night goes on). I’m therefore astonished when drummer John tells me after the gig that they hardly ever rehearse. However, one look at their Facebook page at the many gigs they play in the Herts, Beds and Bucks area on a regular basis, and it’s obvious that this amount of gigging is paying dividends.

If I have one slight criticism, it’s that the band decide to repeat one of their earlier songs towards the end of the set. Maybe this is because the audience is sparse when the song is played earlier, and the band want more people to hear it? Nevertheless, this does little to detract from what is undoubtedly a fantastic set by a very talented band. If you’re a fan of the whole blues-rock genre, Band Of Tramps will be right up your street. And even if you’re not, the sheer quality of the musicianship alone makes for a band worth seeing. I’d quite happily pay money to watch these guys, and yet we get them on our doorstep for free courtesy of the George 2nd. Long may it continue!