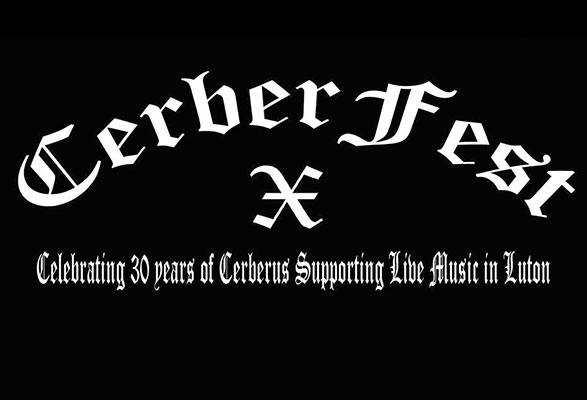 8.00pm – Pre-CerberFest meeting at the George II with Matt Kelly, our sound engineer. Thought we’d check the dark mild was ok – it wasn’t on!! Re arranged the pub furniture and set the lighting rig up. Settled for a couple of Golden Hens.

12.00 – Arrived at pub for set up. Finally had the first dark mild of the weekend! Slowly set up PA and lighting. May have had another dark mild – or 2!

18.00 – Pub filling up nicely, although the heat was keeping most people in the garden or out front. First bands started to show. Adenoids set up.

19.00 – Adenoids kick the weekend off in their usual style – raw punk at it’s best! That deserved a dark mild! Good crowd in for the early start.

20.00 – Iseefourfingers – 1 guy lots of sounds! Don’t normally like people playing with backing tracks but when it’s done this good have to listen to it. The crowd seemed to feel the same way too.

21.00 – From 1 to 2! Giant Haystacks! Our old friends and CerberFest regulars, Rick and Helen, back with a great set. Rick’s high energy drumming and Helen looking particularly glamourous belting out the tunes and lyrics. Always professional, always great! Time for another mild!

22.00 – We’re up to a 3 piece now – LACK! More high energy punk orientated rock! Great to see these guys play again after a few years. Crowd growing as the night cools a little and they seem to be enjoying these guys.

11.00 – The Von Trapps – Luton’s favourite bunch of old punks! Regular performers at the George but this was their first time at CerberFest. Due to ill health they were restricted to a 3-piece line up but still banged out all the classics and kept the crowd entertained throughout their set. Best served with another dark mild!

Midnight – Cerberus! Why did we decide to headline? Oh, Hazard were busy!! All that dark mild and setting up left us a bit tired. Actual stage time was a little later than anticipated but not too far off 12.00 start. Really pleased to see so many people staying until the end to watch our set. Played a good mix of our own songs plus a couple of covers for the audience! Good warm up for tomorrow.

2.30am—Finally left the pub after a couple more dark milds! Looking forward to getting back to the pub for 11.00am!!

11.00 (ish!) – Back at the George. Dark mild helps with waking up! Had a call last night to say Owen the Destroyer could not make the gig – first CerberFest he’s missed. With all this extra time we shouldn’t over run!

12.45 – Ok so we lost all our additional time! Pixie Styx started a little early and good to see many people there from the previous night. Her gentle but fun and sometimes quite rude songs were just what they needed to ease them into the day!

13.00 – Kermori. Although these guys have played CerberFest before this was their first time with their new vocalist. In my opinion their best line up! A great set and a good crowd in to watch them.

15.00 – ENG..ER..LAND!!! Eric at the pub had decided to put the football on the big screen! We compromised with pictures but no sound! The Sun Dog Collective had to play during the first half. All credit to them they had more people watching their set than were watching the footie. Although I did see a few heads turn when the goal was scored!! First time I’d seen the full band line up play and was suitably impressed.

16.00 – Blumunki were to take on England for the second half. Again, the audience in general preferred to watch them than the football and they did get a big cheer when England scored again! First time they’d played in a while but were tight and entertaining as ever. Football result deserved a celebratory dark mild.

17.00 – The highlight of my weekend. We do a Cerberus Old Boys set at every CerberFest but this year was extra special. It’s the 30th anniversary of the band and as the day went on many old band members arrived at the pub. We were able to play as the first ever line-up thanks to KT coming over from South Africa for the gig. First time we’d played together in 28 years! Mandy then joined us for a mark 2 reunion and Martin popped up to make it a mark 3 gig too! Then chaos as all 3 singers joined me, Steve, Paul and Kev for the last song. Great! Time for another celebratory dark mild.

18.00 – I don’t usually book tribute bands for CerberFest, being a strong supporter of original music, but thought I’d give YnT a go as you don’t see as many bands covering them as you do with Guns n Roses or AC/DC. And I know the singer!! This is where the day started to rock up with a great set from these guys.

19.00 – Arnika. CerberFest favourites. Always put on a great show and this year was no exception. With the promise of some great rock bands to follow I think they wanted to impress. And they did. They pulled out all the stops to kick the evening session off in style!

20.00 – Now we headed into headline territory. Second Rate Angels have headlined CerberFest in the past and always draw a great crowd. High energy metal from start to finish. It’s always a pleasure to have these guys on the bill.

21.00 – Our turn again! Cerberus had to pull out all the stops to justify being so far up the bill this year with the quality of bands playing. I think we managed it and left the crowd wanting more!

22.00 – Airforce were next to grace the stage and we were starting to get into rock royalty with Doug Sampson (ex Iron Maiden) playing in Luton. Again. Their next gig was a massive festival in Bulgaria with Maiden closing that show so it was no surprise to anyone that they were on fire from start to finish.

23.00 – Due to someone falling ill in the pub proceedings had to be stopped for a while. Paramedics were called and eventually an ambulance arrived and took the poor guy to hospital. We still had 2 bands to play but Eric agreed we could continue after our allotted finishing time. It’s testament to their professionalism that the bands agreed to play way after their expected time slots.

Midnight – Although a few people had wandered off during the unexpected break many stayed and were treated to a fantastic set by Satan’s Empire. These NWOBHM stalwarts took the stage by storm and showed why they are still going after 30 years in the music business.

1.00am  – Finally, our headline act – Forged in Black. These guys have played CerberFest a couple of times before and I know many people who came along just to see them. It was late but the energy was still there and they played to a great, responsive crowd. A fantastic finish to a fantastic weekend.

3.30am – After a few more pints of dark mild we all went home, leaving the clearing up until later.

12.00 – Pack down! Everyone’s favourite part of the weekend. Matt and I returned to the George and with a little help managed to get it back looking like a normal pub again. With the gear safely stowed away we went home for a well-earned rest and started to think who’d we could book for next year. It’ll have to be good to beat what I consider to be the best CerberFest yet!

I would personally and on behalf of Cerberus, like to thank all the bands that played – you were ALL outstanding. I’d also like to thank everyone who turned up, whether it was for a particular band or the whole weekend. And of course, Matt Kelly for his outstanding hard work all weekend. Without you all there can be no festival.