I’ve been going to The George for many years and it’s one of the few pubs in Luton that has essentially remained unchanged, although it certainly smells better than it used to. The stench of a million spilled drinks no longer permeates the air like yesterdays hangover and, while the pub is not a dedicated live music venue, it remains standing while many others have fallen by the wayside. I also like the contrast with the vapid and stale Hat Factory just a few metres away on the opposite side of the street. The George, say what you like, has character, if not style and on nights like this is filled with the cacophonous noise of numberless intense conversations that compete in increasing volume as the pub fills up. It reminds me of this passage from Down and Out in Paris and London :-

‘The brick-floored room, fifteen feet square, was packed with twenty people, and the air was dim with smoke. The noise was deafening, for everyone was either talking at the top of his voice or singing… The old Rougiers wandered in and out, cadging drinks and trying to tell a long, involved story about someone who had once cheated them over a bedstead. R., cadaverous and silent, sat in his corner quietly boozing. Charlie, drunk, half danced, half staggered to and fro with a glass of sham absinthe balanced in one fat hand, pinching the women’s breasts and declaiming poetry…Everyone was very happy, overwhelmingly certain that the world was a good place and we a notable set of people.’

Or, more darkly, this passage from The Ragged Trousered Philanthropists :-

‘The majority of the guests were standing. The floor was sprinkled with sawdust which served to soak up the beer that slopped out of the glasses of those whose hands were too unsteady to hold them upright. The air was foul with the smell of beer, spirits and tobacco smoke, and the uproar was deafening, for nearly everyone was talking at the same time, their voices clashing discordantly with the strains of the Polyphone, which was playing ‘The Garden of Your Heart’. In one corner a group of men convulsed with laughter at the details of a dirty story related by one of their number. Several impatient customers were banging the bottoms of their empty glasses or pewters on the counter and shouting their orders for more beer. Oaths, curses and obscene expressions resounded on every hand, coming almost as frequently from the women as the men. And over all the rattle of money, the ringing of the cash register. The clinking and rattling of the glasses and pewter pots as they were being washed, and the gurgling noise made by the beer as it poured into the drinking vessels from the taps of the beer engine, whose handles were almost incessantly manipulated by the barman, the Old Dear and the glittering landlady, whose silken blouse, bejewelled hair, ears, neck and fingers scintillated gloriously in the blaze of the gaslight.’ 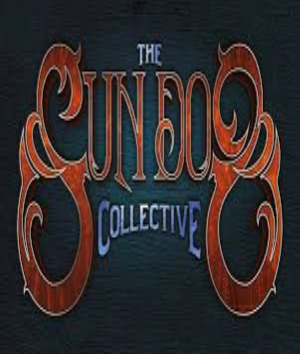 And it’s into this melee The Sun Dog Collective must plunge, accompanied by the obligatory drunken man dancing like a loon far too close to the bands (I believe this is a free service provided by the pub) and we all wait for him to go too far and get chucked out (he does). The tendency for the clientele of The George to make as much noise as possible has been the undoing of many an acoustic act but TSDC soldier on bravely and in the end finish to rapturous applause. Composed of original members Paul Bearman and Simon Costello, the collective is completed tonight by the remnants of now defunct band Ribeye and this mixture is reflected in their set which is a mix of ‘Jack Rabbit’ era Sun Dog songs, Ribeye tracks and a couple of new ones. They are a bit scrappy to be honest with drummer James Mitchell looking like he is quite under rehearsed and I’m not sure that having the whole band sitting down to play was the best approach in this venue. They are, sadly, missing their bass player which also detracts from the cohesion of the songs. However, as mentioned, they ultimately carry the crowd and end with a rousing version of Neil Youngs ‘Keep on Rocking in the Free World’, which goes down a treat. 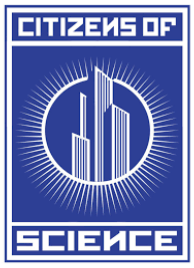 Citizens of Science are a much more solid prospect and play a near flawless set which, however, is not helped by the limitations of The George’s P.A. system, which has to be cranked to maximum volume in order for the songs to be heard. It’s the first time I’ve seen them so I am unfamiliar with the songs, which bear the trademark of guitarist/vocalist Dean Bowmers experimental leanings. This approach is characterised by quite sudden and sometimes jarring changes between sections within each song and, over the noise already described, it’s hard to get a handle on what is going on. It’s clear there is a lot of complicated nuance taking place and all three members play well but it is rather lost in this environment and I would like to see them in a more disciplined setting where their complicated sound would be appreciated

And so the lurid night draws on in increasingly blurry lines. The promised DJ set before, between and after the bands doesn’t seem to materialise, although maybe it did and I didn’t notice, but it doesn’t matter. Here among friends we do indeed feel a sense of importance and release. It’s an illusory thaw in the overall scheme of things but, for now, we are happy to indulge ourselves in that most British of pastimes.