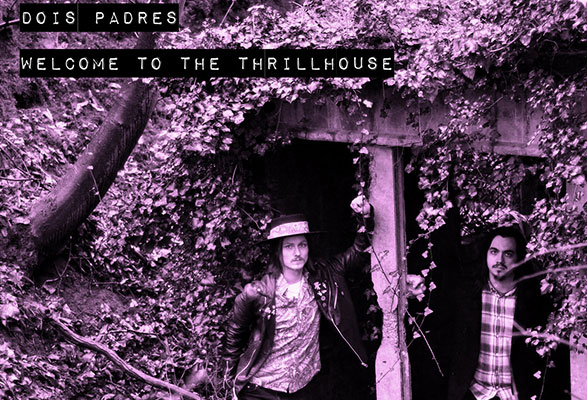 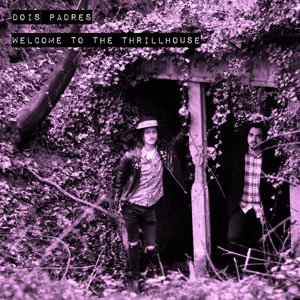 They’ve already got my attention with a great name for an album. I’m very shallow like that – cool name, must be great, although that might explain why I never win any money at the grand national. Hailing from Luton, Dois Padres claim to be fans of anything involving Jack white, Dan Auerbach, Josh Homme and Father John Misty.

The influences are clear the moment you start listening to the album with their punchy opener, ‘Twilight Zone’, although I do wonder if the line “Step out of your comfort Zone” is somewhat ironic here – given the clear influences they cite and the sound of this song. ‘Trine’ starts off well and has a really nice rockabilly vibe to it, it certainly got my foot tapping. I did feel they got a little lost in the middle, but overall this is a solid song. Interestingly, next track ‘Bang Bang Bang’, sounds quite similar to the Von Bondies – which given the Dois Padres appreciation for Jack White, did bring a smile to my face. Danny Young on vocals really gets to show off his voice on this song and it certainly doesn’t disappoint. I suspect they always have a lot of fun playing and performing this one and the energy translates well – even through my crappy little speaker.

‘Hat Drop’ slows it down a notch but is still in keeping in theme with the album so far. There’s a bit of Rolling Stones in this one as Danny again shows off his vocal range. We’re also treated to some funky guitar work that really gets a chance to shine with the slower pace of the number. ‘Ride So High’ is another slower number with a real White Stripes feel to it, in fact, if you hear this on the radio (do people still listen to the radio?), you might be fooled into thinking it was Jack and Meg with some sort of reunion track. I was a little disappointed with track 6 – ‘What About Me’. The intro fools you into thinking it’s building up to something, with some really nice guitar and drum work, but then just falls a little flat. I think as it’s the middle of the album as well, a little fatigue has settled in, so it would have been far more satisfying for the intro to have exploded into something. The rest of the song had elements from the previous tracks although the drumming, to George Cowan’s credit, is solid throughout. ‘Chapel of Bones’ really stood out to me as it wasn’t like any of the other tracks on the album. The vocal effects, the haunting guitar and the more up and down flow had a whiff of muse about it, which was a really nice change of tone. As they had sung about back on the first track ‘Twilight Zone’, stepping out of their comfort zone – can and does pay off. I know I’d enjoy seeing them play ‘Chapel of Bones’ live.

With ‘Moonday’, Dois Padres fall back into familiar territory, but after hearing ‘Chapel of Bones’, you don’t mind so much. Your ears are refreshed enough to go back and listen to their more meat and potatoes offerings. The change of pace midway through is also well received, with Danny again showing off his finger work on guitar. ‘Sweet Release’ is another punchy number which gets your foot tapping. You get the full force of the fuzz in this one, like the fuzz dragon pulled out it’s chain and flew out of the cave burning all those that dared lock it away.

I don’t know if it was my crappy speaker, but the mix just didn’t sound right on ‘Thrillhouse’. All I could really hear was the cymbals, which is a shame as I’m a big fan of heavily instrumental tracks numbers. When the cymbals weren’t being played in the middle it sounded like Danny was enjoying himself on guitar again. This is another one that I suspect I’d really enjoy live – particularly around 5 or 6 pints into the evening. They finish on ‘Big Ol’ Church’, which was a good choice to finish on as it’s a really upbeat song that keeps you engaged for the first half of the track. All of their influences are thrown into this but the sunnier nature to the song lifts it above the rest of the similar tracks on the album. The only complaint I have is it finishes far too soon, they could have milked this one a bit more and then stuck an outro on the end.

On a debut album there will always be a tendency to play it safe, stick with what you know – and I think that’s the case here. This is a solid album, but I’d be interested to see what Dois Padres are like without the seat belt on. There were a couple of glimpses here that piqued my interest, so I’ll certainly be keeping an eye out for their follow up. On the negative side, I think they could have done a better job with the track order. You do need to break things up a bit if you want your audience to keep listening to the album, whereas I’d probably just stick my favourite tracks off it in a playlist, rather than listen to the whole thing through again. Whilst I have no doubt they would be great fun to watch live, the album could have done with a bit more thought and little less restraint. There’s a decent album in this band and as we all know, this music game is a learning process, so hopefully we’ll see some more from them soon. I know I’ll be keeping an eye out for the next time they are playing in town.