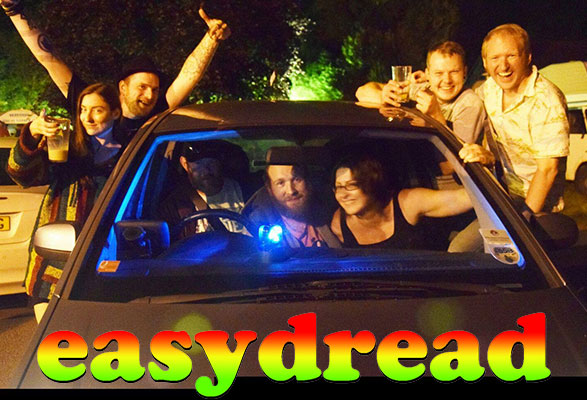 Tonight is the first Vandalism Begins At Home showcase gig for a whole decade – and with the sun shining on this glorious Friday evening, it’s almost like going back in time to the original VB@H showcases that Chriss Randall organised at The Well in the summer of 2005.

The only band I’m unfamiliar with on tonight’s bill is The Roves, but they kick the evening off in fine style, and I thoroughly enjoyed their set. They have a bright 60s sound – the vocals in particular come straight out of the classic Rhythm & Blues from that era – and their stage presentation is very unassuming. There’s no theatrics on show here, and they roll from one song to another with barely a pause and with minimal audience interaction. The songs themselves are not in the least bit overcooked, and the band remain tight throughout. Even when the lead guitarist sings a couple of numbers, clearly lacking the confidence of the main front man, this does nothing to detract from the songs themselves. After a while, you kind of get the idea and realise you’re not in for any major surprises musically, but a job well done none the less.

Next up are Ill-Informed, and suddenly there’s a bigger crowd gathered at the front. There’s just a guitarist and drummer on stage, and the guitarist starts by announcing, ‘I’m not the singer, which is why this won’t sound good.’ I soon realise that the usual lead singer, Laura Hill, is standing watching the band with the rest of the punters. It’s not made clear why she isn’t performing tonight, and the rest of the band seem to struggle without her, trying to tempt her on stage in between songs and asking for help with lyrics. However, the set itself is very energetic, and despite the occasional doubtful glances to each other, the temporary two-piece are tight together. Having said that, lead singer aside, there’s just something missing. I can’t quite put my finger on it, as all the elements are there for me: the dirty guitars, the high-octane performance, the tightness of the band in general…but there is something that’s not quite grabbing me about this band tonight.

The crowd increases further as local favourites Hazard take to the stage, sporting matching leather jackets and looking like the archetypal punk band. I’ve not seen Hazard for a while, and in that time they’ve changed drummers and added an additional guitarist, so I’m curious to witness the ‘new’ line-up. They also seem to have made quite a name for themselves locally of late, as is evident judging by the Hazard T-shirts being sported in the crowd, and they’ve played their fair share of high-profile gigs and impressively released the single ‘Freedom Fighters’ on 7-inch vinyl. It’s therefore no great surprise that this band oozes confidence, especially in contrast to the previous two bands. The first few songs are pure, out-and-out punk, but after a while the songs start getting longer and more melodious, reminding me somewhat of Stiff Little Fingers, and the new song they play is very catchy and includes lots of interesting changes. Personally speaking, it’s hard to get too excited about their set, as there’s no new ground really being broken here. However, there’s no doubting this is a top band, and I’m glad Luton can call them our own.

Finally we have Easydread. Straight away it’s obvious that there’s a few members of the band missing, and for tonight the saxophone player is standing in as drummer, but the band still give a great performance, with rock riffs-a-plenty blending in perfectly with the ska/reggae feel and a wonderful horn section. The crowd does seem to have dwindled somewhat since Hazard were on stage, but those of us left are soon dancing the night away and being treated to the ultimate good-time band – if Luton needs Hazard, it definitely needs Easydread.

All in all, I think this was a very successful night for Vandalism Begins At Home, with four talented bands and an impressive number of attendees, and I’m looking forward to future showcase gigs. I particularly like the fact that every band was different from each other in style, sound and presentation, and I think this is something Spike and Ben should bear in mind when organising future gigs. Ultimately, the naysayers are wrong: Luton is thriving, and tonight proved it.