Easydread have been taking over with their irresistible reggae rhythm and high energy live shows.  With their own one day festival ‘Scrotefest’ approaching, singer & guitarist Steve Alger spills the reggae beans.

What have been the highlights so far this Summer and what else is in store?

We’ve had some fantastic gigs so far over the summer and we always have a blast playing at Smallworld Featival.  We’ve played some amazing club gigs such as New Town Kings at the New Cross Inn and I’m sure Equinox festival is going to be an absolute smasher in September.

What can people expect at Scrotefest?

Scotefest is our first venture putting on a festival and we’re hoping it’s gonna be awesome!  We have put together an amazing lineup made of bands/friends we’ve played with throughout the year, including Vegetable Collective and Lead Shot Hazard and it’s fair to say it’s a who’s who of some of our absolute favourite bands.  It will be at new venue Luton Underground on Guildford Street in Luton on 14th September. 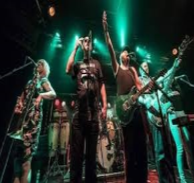 Is it fair to say Easydread have carved out a niche within the local scene with your style?

We seem to have got a bit of niche in the scene as a whole as theres not many reggae bands that play at reggae events, and also do the ska scene gigs as well. So we’ve been quite lucky in that regard to have a broader appeal, we’ve even had death metalers skanking a few times!

When did this love affair of reggae begin?

I got into punk music in my mid-teens and was soon listening to bands like Bad Brains (who are at Esquires soon) and Sublime, who were heavily influenced by ska and reggae bands, and let’s face it, who didn’t grow up with a copy of Bob Marley Legend in their house somewhere.

How important is having a message in your music and what would you say this  message is?

Music is life and life is a learning experience, without a message the music means nothing.  The lyrics range from being about people opening their eyes to the world around them and how we live in a world where we are all treated as a commodity, to just being nice to each other and helping out your fellow man.

What are your favourite local venues to play?

We absolutely love venues such as Club 85 and Bedford Esquires.  We’re so lucky to have amazing venues like this on our door step, because more and more independent music venues are closing all over the country.

You’ve released 2 EP’s so far – any plans for more?

Yeah indeed, both our EPs are availible to listen to on Spotify, Apple music and bandcamp.  We’re in the process of recording our debut album, we have the songs listed that we want to put on the LP and it’s now just a case of us pulling our fingers out.