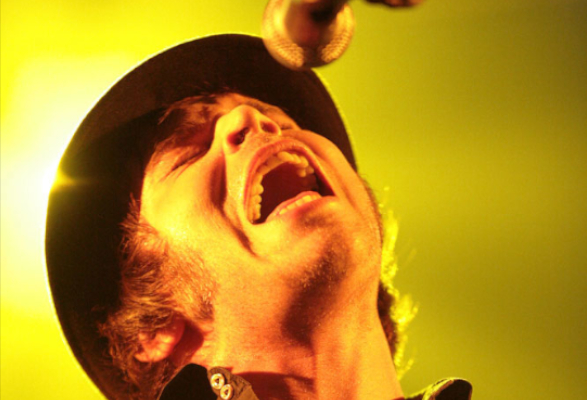 Mention the name Gaz Coombes to most people and, let’s be fair, they won’t have a clue who you mean. Those who do know him will probably picture the fresh faced, sideburned scallywag, frolicking about in the video to Alright with his Supergrass band mates Danny Goffey and Mick Quinn (not to be confused with the former Newcastle United striker/renowned horse mistreater of the same name).

That was a long time ago though. 25 years, in fact. Coombes has matured. Presumably as a man, indisputably as a musician.

His three solo albums to date have all achieved widespread critical acclaim and the fact this gig sold out so far in advance would suggest his fan base is wider than just the standard ageing britpoppers.

Tonight, there’s no band with him, it’s essentially an audience with Gaz Coombes. He flirts between acoustic guitar and piano, perfectly adept at both. Three songs into the set he delivers a brilliant piano and vocal version of his latest single Salamander which has been a favourite on 6 Music recently, the last bastion of decent music on the radio with the exception of Transmission (Monday nights, 8-10pm, Diverse FM). It’s inspiring, moving and I should imagine it’s what Chris Martin thinks he’s achieving in his head when he sits down at the piano and writes another dull as dishwater Coldplay ballad. But it isn’t. Coombes displays the ability to make the simplest things sound quite beautiful.

His set list includes tracks from all three of his albums. Around about the time he released his first, 2012’s Here Come The Bombs, me and my pal Crofty sat and listened to it in the early hours of a Sunday morning, as a typically lairy booze up wound down and we declared Coombes “a national treasure”. You might assume that was just the booze talking but we’re both here tonight and both agree we’ve been vindicated in the intervening years.

As you went up the stairs into the main room at Esquires, a poster presumably especially for this gig states “If the gig is getting in the way of your conversation please piss off somewhere else” (I’m fairly certain I’m paraphrasing, this was nearly a week ago now and I don’t give enough of a toss to check the exact wording cos I’m sure you get the gist). Whoever it was who decided the poster was a good idea has got a point. There’s nothing worse than the sort of gobshite who starts having a chinwag as an artist is playing one of the more delicate moments of the set. They needn’t have worried here though. It’s a knowledgable Wednesday night crowd who appreciate the artistry on show. When I nip to the bar during another of Coombes’ piano ballads, Oxygen Mask I squeeze past the actor, comedian and Luton Town fan Matt Berry. In usual circumstances I’d probably deliver a quote from one of his many memorable comic characters and say hello, but I don’t through fear of being “sssshhhh”d by other audience members, which is how it should be on evenings like tonight.

Other highlights of the set include The Girl Who Fell To Earth which Coombes says was inspired by his autistic daughter and the upbeat Hot Fruit. The encore consists of Walk the Walk plus two Supergrass songs, the brilliant Moving and Caught By The Fuzz which I could have taken or left to be honest but it makes a lot of people very happy so you can’t really argue with that.

So, another great night at Esquires comes to an end and I have to say if you get the chance go and see Coombes live cos it’s an enthralling and captivating experience. He’s genuinely one of the best British songwriters about at this moment in time and deserves to be mentioned in the same breath as the likes of Richard Hawley and Ed Harcourt.