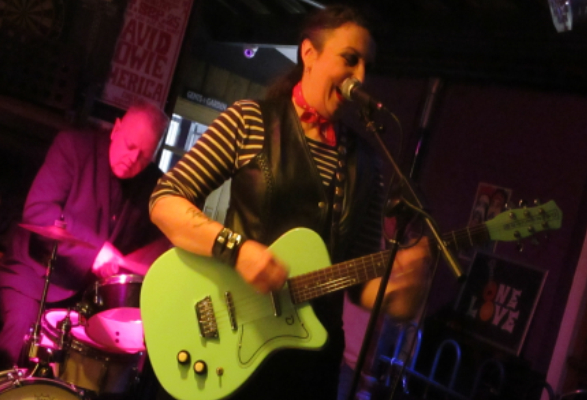 In town, there seem to be too many people milling around St George’s Square and the town hall. The Christmas lights have been turned on, after all. Wellington St’s quieter; Hastings St has the cosy, reassuring hush of Saturday evening.

Inside The Black Horse, it’s fifteen minutes before ‘show time’. There’s no sign of any kind of show. A couple of locals are holding court, like locals do, making me feel slightly anxious, and as far away from musical as you could imagine. 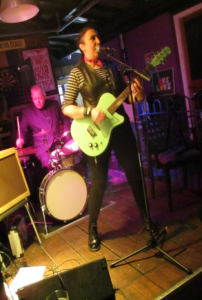 Thankfully, Helen and Ricky soon after. They’re travelling light. Suspiciously so. Yes, Helen’s got her full size Danelectro, but she’s also brought a cut down, easyJet friendly guitar – with a 1957 pick up – tucked under her arm. Ricky’s got a couple of cases, from which he produces his recently and very literally sliced down drum kit, whose wooden shells have been severely reduced in size, again, for ease of transport. Ricky’s own work.

For anyone who doesn’t know, this is all pretty standard. Giant Haystacks is Helen Shadow and Ricky Lee Brawn’s band featuring Helen Shadow and Ricky Lee Brawn when they’re not playing in The Shooting Stars, The Nut Jumpers or any other acts and projects they’re involved with.  They’ve been around for ages, and they’re terrific. Their music is rock and roll, souped up with influences, which if you read Helen’s interview in a recent edition of this very mag, include Howlin’ Wolf, Dr Feelgood, rockabilly, The Cramps and punk. All right there in the music attack, loud and proud, with an energy belying there only being two of them rattling and bashing, tonight, in a pretty small, not that well attended pub.

No matter. In two charged sets, Haystacks cover Link Wray, The Everley Brothers, Nancy Sinatra, White Horses (an old kids show from the 1970s) and others besides, mixed up with their own tunes, many of which are delivered in Helen’s Black Country twang. 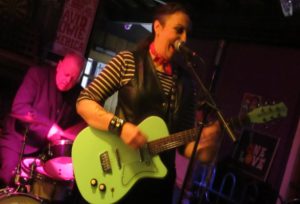 There are no industry narks; no sound or stage people fussing about; no merch or posturing. Well, there’s a bit of posturing. Like the equipment though, the patter and attitude – pattitude? – in Giant Haystacks’ music is stripped right back to bare, bloody essential. Very good it is too. Things might get scrappy here and there, but I don’t really notice.

For all the onstage irreverence – at one stage Helen calls out a bloke at the bar for ‘dancing as if he’s shat himself’ – this is music played by people who love music. Their enthusiasm is infectious. Admittedly, the allure is lost on some of those present, although there are plenty old enough to know better (and many of whom probably do know better), tapping and gurning along and enjoying themselves.

Giant Haystacks are like other old lags on the Luton scene, who have bubbled up from some old scene or sound or other, taken a twist and kept going. We take them for granted, which probably won’t bother Helen or Ricky THAT much, but we do so at our peril.