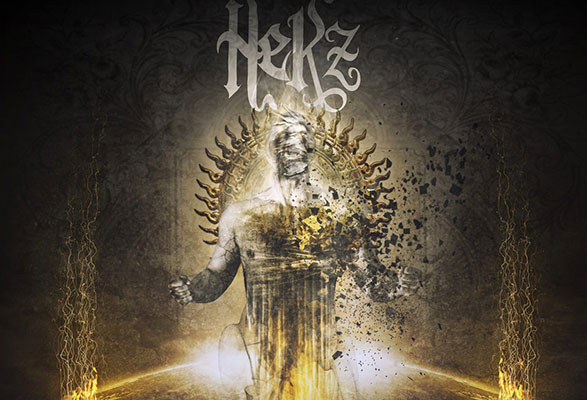 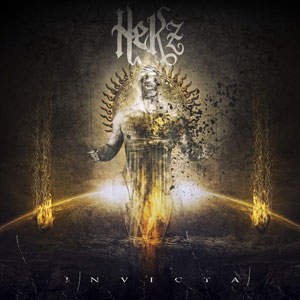 Having nominated this album in my top ten of all time, I have been kindly asked to write a review by VB@H fanzine as Hekz are local, being Luton/Bedford based, and still relatively unknown In the UK. That seems to be changing fast although not as fast as they deserve.

The album arrived with gatefold sleeve cd, lyrics booklet everything you’d expect from purchasing an album at HMV. It’s hard for a band with powerful music and thoughtful lyrics these days, so massive kudos to bands like Hekz who go on producing great music despite the hardships, hard work and time it takes to do so.

And so to the music. From the outset, there is an atmosphere of something great about to happen, and ‘Quetzlcoatl’ does not disappoint. There are time changes aplenty and phenomenal drumming, with the whole band switching with drummer Kirk from one time signature to another with amazing precision. Great riff follows great riff and the hook in the chorus keeps things memorable with the powerful authority of Matt Young’s voice. A truly epic opening track.

‘For Our Lives’ starts with big vocal harmonies and a huge bombastic intro. This is a feelgood song of the highest calibre and a real crowd pleaser. Matt then explains there is a bigger picture here and everybody is included in the sentiment, and as the chorus kicks in again the urge to sing along grows. An immediately accessible and radio friendly second track that sounds like a hit the minute you hear it.

Some remarkable keyboard wizardry opens track 3, The Light Fantastic, a fast prog rock journey with heavy riffs and lyrical attitude, yet another memorable chorus, and another amazingly adept guitar solo from Al Beveridge. ‘The Lions ‘continues with time changes that are seamlessly performed and this time we get to hear solo’s from both Tom and Al and both step up the atmosphere of the song,

‘Ultimatum’ starts quietly with James Messenger playing a delightfully melodic piano as we hear the band drop down for the first time into an atmospheric intro with the promise of a big build up and yet again they don’t disappoint at all. The imagination and musical chemistry that goes  into the music really stands out on this track. What to play when is the secret, and these guys know exactly what they are doing.

‘Line in the Sand’ shows the maturity the band now possess. Beginning with a haunting keyboard piece from James we drift into nine minutes and thirty eight seconds of musical genius. This time it’s not how much you play but where you play and the atmosphere is expertly built up into an epic finale

‘Trecena’ then twists and turns its way into the air before building to the chorus, which drives in with brutal stabs from the kick and snare. Next song, ‘Pariah’ is another song full of grandeur and perfectly thought out arrangements which can drop to one instrument, and then build to a crescendo not once, not twice, but three times .

For me the crowning glory is ‘The Devil’s Coin’. This anti money-grabbing 15 minute  tune begins with suitably heavy riffage, building into the main melody before philosophical digs at the rich of this world who adapt their moral behaviour to earn money no matter at who’s expense. It is an epic song that has to be heard

Finally, ‘Victorious’. I have to try and see if any sports teams out there need a Queen like anthem for when they win a cup or title. Aren’t we all fed up with “We Are The Champions” by now?

This is better than that.