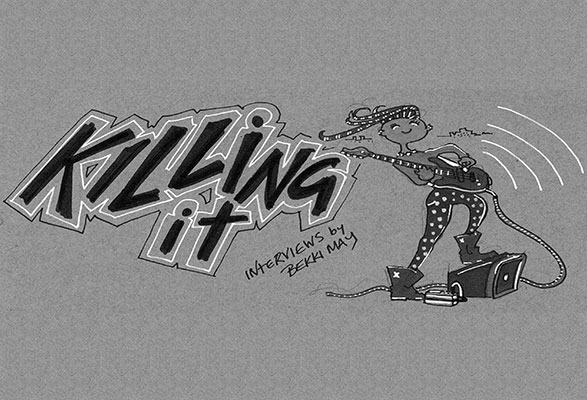 I’m interviewing Helen Ingham, who I had heard about for a long time for her work in the Giant Haystacks before I saw her live in The George a couple of years ago and was struck by the huge, defiant sound that can be made by one woman with a guitar, pedals, something to say and an energetic drummer.

Helen, tell us a bit about how you started in music and the scene that Giant Haystacks is part of. What other projects have you been part of?

I’ve always been a bit off grid and done my own thing and there’s always been loads of stuff going on at once, it’s just the way it is! I grew up in a mining village outside Tamworth in Staffordshire, so not too difficult to be a rebel really!  I’ve played music since I was a kid, I remember hearing the guitars of Joe Brown and The Shadows on the radio in the early 60s. One day Mum was given a knackered old shitbox and Dad taught me to play it when I was 10 or 11. We used to play Irish folk, old blues, negro spirituals and sea shanties, with a bit of classical thrown in. Later on, having had enough of my parents, being a typical teenager, I was locking myself in my room every evening; my mates at school were in love with David Cassidy and The Osmonds, while I was teaching myself ragtime picking by reading tablature and slide guitar by listening to old records. Then I learnt a bit of mandolin.

My first proper band was a skiffle band called Windhover (an old word for Kestrel) which included some of my musical schoolmates and a couple of switched on teachers (one of whom gave me my first ride on a Norton Commando, while the other was the organist at Lichfield Cathedral who gave me a full demo one day – talk about power on both counts! ). Windhover used to play garden parties and old people’s homes as well as the inevitable school assemblies. It got me out in front of an audience and used to the concept of stage-fright. At home on my Dansette record player I was listening to my Mum’s old big band 78s and Leonard Cohen.

I  went to Art School in 1975 . At the time I was listening to Howling Wolf. Dr Feelgood and Eddy and the Hotrods came along like a big smack in the face, then Punk – and the pure energy and fury summed up what I was about. My family had broken down, so the set of standards I’d grown up with were completely out of the window. I didn’t always like the music although the gigs were great, you knew you were part of something huge and you felt invincible. We had bands at college, but they were more interested in Bowie covers than punk.  I was done with the Punk movement by ‘78 it when it became yet another set of rules and basically contrived fancy dress, although being part of that angry and very creative generation is just there with me. I believe the political and social climate led to the UK Punk movement, the 70s were very similar to now in many ways, except now is much worse!

I discovered Rockabilly through a band called Whirlwind from West London used to support The Clash. You’d hear wild Rockabilly tracks played at punk gigs, it had that same energy and was hard as fuck, but was based on a lot of the traditional folk music I’d been listening to.  I’d go to Rock’n’roll gigs with my dyed spiky hair and risk being hissed at by assorted Teds and the Greebos, but they accepted me in the end, because I was there for the music, bikes and excitement, just like them. The Cramps came along and ramped it up for me even more, throwing 60s Garage and 70s New York Punk into the pot as well as the wildest 50s Rockabilly.  I moved to London with a few quid saved after doing a season in the cafe at Clacton Butlins. I’d answered an ad in Melody Maker for a guitarist in a “fearless” all-female Rockabilly band called The Addams Sisters that was starting up. The band didn’t happen in that way, but I’d got myself a group of like-minded friends to knock about with and we’d go to very early Meteors gigs at the Hope & Anchor and the Greyhound as well as the Ted and Rockabilly do’s. We tried to be scarier than everyone else, I don’t know if we succeeded, but we broke a few fights up, just by purposely standing in the middle
of all the aggro. We probably started a few too…

I’d got myself into another band by now and we were playing South London Rock’n’Roll gigs. Eventually the all girl idea was mooted again and I joined The Shillelagh Sisters along with some of the other Addams Sisters and a couple of The Polecats’ girlfriends. Being all female attracted an amount of media attention, but it all started going awry along with stuff in my personal life, so I left just before they signed to a major label. Predictably it all ended badly for them and the only people who gained were the lawyers and the record company, of course.

I was in several other bands including The Blue Ridge Rockets who were based in Oxford, where I then lived. We had several iterations possibly because of my difficult and abusive boyfriend who was the drummer, we played the 50s circuit here and France and Belgium usually. Eventually I dumped the boyfriend and moved back to London with the remnants of the band. The singer was becoming more unreliable being stoned all the time, so I decided to go solo as “Amoco Cadiz”.

I ended up supporting my own band and blowing them off stage. Nigel Lewis, the legendary Meteors bassist and some would have it “The Guv’nor of Psychobilly” was in the audience and also playing solo at the time and he decided he wanted to do a project with me. That was the start of The Johnson Family, who featured a couple of other early Meteors on drums at various times. We recorded a couple of singles and had tours of Germany and some great support gigs. Then came The Queen B’s, a trio with female double bassist (American, Angie Boothroyd) and Mark Robertson (Meteors again) on drums. None of these bands sat comfortably within any genre, which is why they all fizzled out after a time.

While in the Queen B’s I met my (now) husband and drummer Rick, who was a friend of Angie’s and recording a session for us, with his mobile valve studio. After we got together I was involved in various of his musical projects for a while, but as he was very well known on the ‘billy scene, I was sometimes overlooked by reviewers. Or maybe my mohican hairstyle upset their sensibilities, or maybe I was just shit, or maybe they were just wankers, who knows?

I packed in music for a while as there seemed little point in just playing by myself as it’s difficult to progress without a goal and I was fucking bored with it.  However I’d put in the odd one for Cerberfest as Giant Haystacks with me and Rick and Gaz Day on bass. Eventually we dropped the bass and became duo.

What were your best and worst gig/rehearsal/recording experiences?

Best gig – loads of them! One Halloween, I supported The Cramps with The Johnson Family at Kentish Town Forum, I met them afterwards at the end of tour party. That was a bit of a winner! The Shooting Stars played a major festival in Italy, one night we were playing in the moat of a Mediaeval Castle, the next we were on the main stage in front of 10K people all up for a party. It took me two weeks to come down from that. I like small gigs too, like The Black Horse, especially if I’m solo or with Haystacks. It’s more spontaneous and you can mess about more. It’s just like a good night out with your mates!

The night I saw you at the George, it was just you and the drummer. It sounded amazing. What tips do you have to fill out all that musical space? Any tips for small vs larger gigs?

Thanks! Make as much noise as you can, but make it quality noise and don’t be afraid to play quietly and leave space too, it will have more impact.

Make sure you work with the drums and lock into that rhythm. Get the telepathy thing going within the band, Nigel Lewis taught me that, mainly because he used to say fuck all! If you’re doing a gig regardless of the size you are playing to everyone in the room personally, even if they aren’t listening or are on the fruit machines etc. you are still providing a them with soundtrack. That’s your job. Some people I know can’t handle it if they don’t have the audience’s rapt attention. Personally I don’t give a shit, someone’ll be listening and enjoying it hopefully! If someone’s rude, great – that’s your way in, throw something back at them verbally, then everyone will be on your side – the Alternative Comedy circuit taught me that!

If you are female be the best player you can possibly be and work on the same terms as the guys. If you’re good looking, great, but don’t rely on it, as no-one will really cut you any slack, unless there’s something in it for them. I’ve depressingly seen attitudes change towards me as soon as I’ve changed into a more ‘exotic’ outfit and stuck some false eyelashes on for a gig. I don’t do the all girl band thing any more either, it excludes people. I am a guitarist and singer who happens to be female, end of.

What pedals/FX would you recommend to a beginner on a budget looking to improve their sound on stage?

A decent tuner and the best guitar/amp you can afford, particularly if it has valves in it. I used to use a bit of delay, but don’t bother any more, it can muddy the sound. Sometimes I use a bit of tremolo on the Bo Diddley type stuff. I think the way you play has a lot to do with your sound. I was lucky enough to meet Wilko Johnson recently. I asked him what amp he used in his Dr Feelgood days and it was an HH, same as we all had – a horrible solid state thing! I always assumed it was an AC30 or something. Get a decent set of earplugs if you sing and have a drummer as loud as mine as stage monitors are inevitably useless.

I’ve seen examples of your sign writing (Is this the correct term?) work in poetry nights, art shows and gigs over the last few years. How does your music influence your art (and vice versa)?

It’s all the same, it’s all communication and sharing your gifts whatever they may be. I consider myself extremely lucky to do what I do, so feel it’s my duty to share it!

Helen Ingham will be playing at Cerberfest 2018 on July 13th. You can find her on Instagram at @hiartzpress