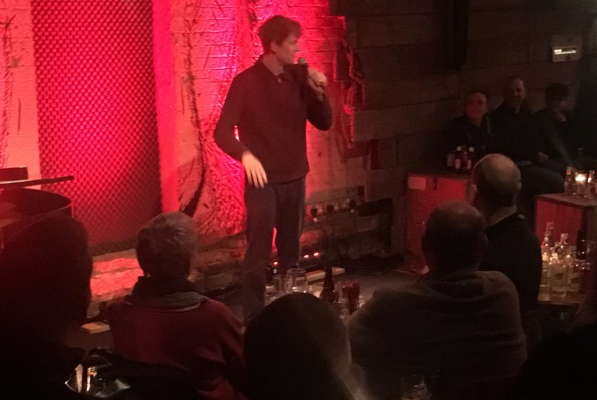 James Acaster is, in my opinion, the best stand-up around right now. If you haven’t seen his 4-part special “Repertoire” on Netflix yet, I can’t urge you enough to go and watch it. He’s a man right at the top of his game. Acaster is known as being the kind of comedian other comedians watch in awe and undoubtedly jealousy. His jokes are honed to perfection, but you never see the punch line coming, simply put, he is a master craftsman of the art of stand-up comedy.

To have James Acaster performing in Luton at the Bear Club was as thrilling as it was surprising. In fact, James himself joked that all of his “comedian friends” would be shocked to find out that he had played a gig in Luton. The fact that he did means that the promoters Happy Shark deserve a huge amount of credit for getting him there in the first place. In-fact they have made a habit of getting fantastic well-known comedians to play at the Bear Club each month. Previous performers have included acts such as Joe Wilkinson, Dane Baptiste and Tim Key. At the time of writing, they’ve got Shappi Khorsandi (sold out) and Alistair McGowan due to perform in the coming months.

I’ve been to a few of the comedy nights at the Bear club and it always fills up fairly quickly, but this time it was rammed pretty much as soon as the doors were open. There was a real sense of excitement and expectation in the air. Safe to say Acaster didn’t disappoint. Having created numerous shows previously which rightly received heaps of praise the worry was that the new show couldn’t possibly match up. These fears were eradicated from the opening joke were Acaster mused on the joy of getting things on his “to-do list to-done”. On the face of it a seemingly banal observation, but Acaster’s art is turning the minutiae of life into something hilarious. Whether talking about to-do lists, balancing a CD Walkman on a long car journey or the fact that Man United’s mascot is a “certified demon”, James always has a way to make the ordinary extraordinary.