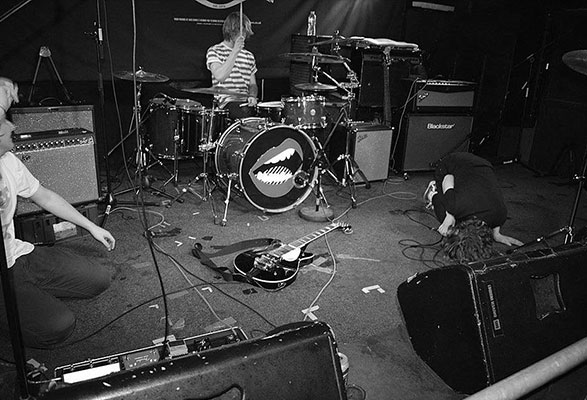 A hectic day which involved work, picking up the newly minted copies of the fanzine, (a brief nap) , dinner and a meeting with my co-conspirator, Ben, ends with my attending the launch party for Ill Informed’s new E.P. at Harveys on Park Street. I’m not sure if the gig started early but it begins almost the moment I arrive, not late, honest guv.

Openers Dropouts are excellent. It’s truly impressive how much solid power guitarist and vocalist Harry Fox gets out of his guitar. They’re only a three piece but when the guitar kicks in it’s with a gloriously visceral energy. The songs are solid and the performance is excellent; they’ve brought some dedicated fans who sing along to a couple of songs, which helps as well. To me they sounded a little like first album Nirvana; raw and undisciplined, but with great early material. It’s not perfect, but their attitude carries the day and they’re my favourite band of the night.

Brighton based 4-piece El Moono are impressive but stray a little too often into Pearl Jam territory for my taste, which is most egregiously personified by incongruous clapping in the middle of what had been, until that point, quite a vicious song. It was hard to figure out whether it was singer Zac Jackson’s delivery or if his mic was a bit quiet but the more melodic, softer sections of songs were often left directionless by the lack of a strong vocal line. Having said that, they are still good and at their best when veering towards their Mathrock side. The lead guitarist in particularly is excellent throughout, engineering some lovely feedback driven transitions between songs and It all comes together nicely in the end, when they play their latest single, which was very good.

Assimilate are probably the band that are least amenable to my tastes, being more of standard ‘Metal’ band from my point of view. As a band they are perfectly competent and are all clearly talented musicians, but this would not have been enough to hold my attention if it wasn’t for singer Jake Aston, who gives a masterclass in fronting a band and corralling a crowd. His vocals throughout are top class and his crowd work fearless and impressive. His delivery, energy and charisma raise the level of the bands appeal above the merely ordinary and they are the perfect band to tee up the crowd for Ill Informed’s set. My only gripe is their cover of Parklife and that only from a pedantic point of view as they don’t follow the sodding chords in the chorus properly, which I found annoying.

So, lastly, Ill Informed take to the stage and play a set which I personally found disappointing. The band are clearly having a great time and they are, at heart, a punk band, so it’s to be expected that won’t simply stand there, play 6 or so songs and bugger off. However, the stop start nature of the gig starts to eat away at the excited anticipation which had built up throughout the night and this is reflected in the crowd which, despite being as partisan as you can get, loses energy as the set goes on. This is not helped by Laura Hill’s vocal delivery, which is not direct enough to cut through the noise meaning I couldn’t make out a single word throughout. I don’t know if this was a technical issue or a matter of mic technique on her part, but if they are to progress in either of the Battle of the Bands that they are involved in, they will need to work on these aspects of their live performances. The gig improves when they play the songs off the new E.P. but they still lack the cutting edge which I was eagerly hoping for and, without a bass player to underpin the guitar the songs come across as slightly anaemic and washed out. Don’t get me wrong, they have all the potential of a good if not great band. However, on this showing, they have a lot of improving to do if they are to realise that potential.