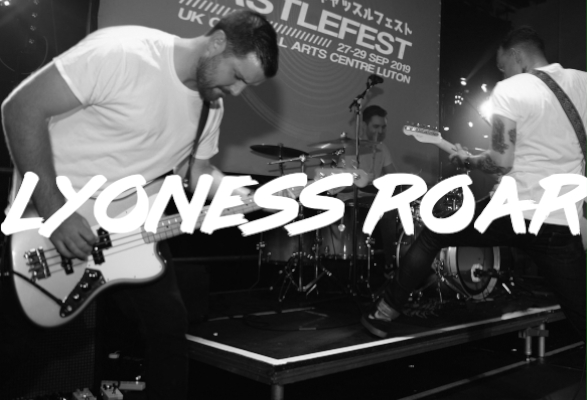 People are coming back to live music as an antidote to digital,says Steph Carter, who has performed on stages all around the world. 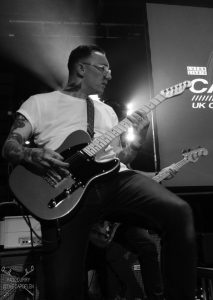 With his brother Frank, he formed Gallows in 2005, releasing critically acclaimed debut hardcore LP ‘Orchestra of Wolves’ and touring the US and Europe, before reportedly signing to Warner Bros. for £1million and releasing brutal second record, ‘Grey Britain’, only to be dropped unceremoniously after sales of 50,000 worldwide. That was a decade ago, when fans still bought records, rather than streaming them online for free, but who needs the hassle of a major record label when you can do it yourself?

That’s where Carter is at with his new outfit, Lyoness, the second band he’s formed with wife Gillian Maxwell on vocals, after the demise of The Ghost Riders in the Sky.

In this new guise, accompanied by Simon Short (bass), Ali Brown (drums) and Dan Parkinson (guitar), they’d barely played a handful of shows when they blew the roof off Castlefest, during an afternoon slot at, back in September.

If you missed that, they’ll be back in Luton as headliners for the Vandalism Begins at Xmas all-dayer on Saturday, December 21. It’s a gig which will sign off a fine year for this ‘zine, the inception of which is cut from a similar DIY cloth that, years earlier, saw the teenage Carter brothers help form their own scene in their Hertfordshire home, because no-one else was doing it.

“We did a lot of gigs in Hemel at the Boxmoor Arts Centre,”  the guitarist says. “That’s where a lot of bands in that area cut their teeth, as well as at the Pioneer in St Albans. So, before we did Gallows, Frank and I played in some bands together. We’d all play at these venues. Enter Shikari and Lower Than Atlantis played there, and it was like an actual community of music. It’s kind of coming back now.”

“I grew up with up with dial-up broadband, so for people nowadays to have music so readily at hand, well, it’s a blessing and a curse, because you tend to make your mind up within three seconds whether you want to finish listening to a track. When we were younger, you’d have to go out to a gig to find and experience new music because you couldn’t experience it anywhere else. It’s good now that people are wanting to come back to live music because they understand live music is a snapshot, a moment in time that you can’t ever recreate. People are coming back to that and ditching their phones and coming back to gigs.” 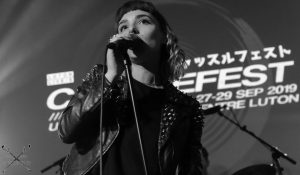 The DIY ethos is something Carter has been able to reconnect with, if indeed it ever went away. It has extended to Lyoness’ recorded work as he and the band have self-recorded and produced two colossal singles, ‘I Don’t Care’ and ‘Demon Beat’.

He says “As much as I’d like the industry to go back to the way that it used to be, I signed that (Gallows) record deal in 2007 and people were still buying records at that moment in time, but Warner Bros now own those songs until I’m about 75. What am I going to do with them then? Now you can find everything online, but music will always find a way to push through and evolve. Doing it on our own, from the Ghost Riders stuff, I own all of that. With Lyoness, we as a band own all of that. Maybe one day the band, if it gets to that point, we will look at deals, but we don’t need one. With digital distributors, you can be your own record label. More and more bands are breaking into the charts as independent artists. The industry is changing but it hasn’t caught up with this uprising that’s coming from the bottom. People who put music out themselves, they self-fund it and use their own digital distributors. You can build you own profile and career however you want because you’re the masters of your own destiny.”

It means that the definitions of success can now be whatever an artist wants it to be while, for Carter, it’s all about “having fun,” though he admits: “It is probably different for me because of what I’ve done in the past, but every time we play people come up to us and say, ‘I’ve heard of the band, but we didn’t know what to expect and I loved it.’ That’s all I care about and if you didn’t enjoy it, wicked, come and tell me why you didn’t enjoy it, though I might tell you to do one.”