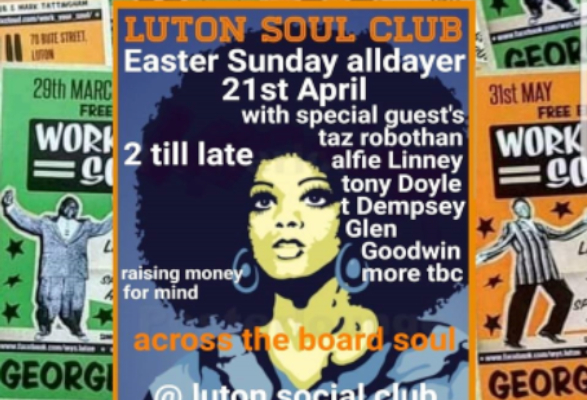 One of the busiest DJ’s in town, Mark Tattingham found time to guide VB@H through Luton’s Soul & Motown scene and explain why vinyl’s the only way.

How did you start Djing and which local events are you involved in?

I began Djing mainly performing guest slots back in the day, then had a bit of a break before getting back into it with Simon Cobb at Work Your Soul, which he’s the brains behind.  I’ve always been collecting vinyl and decided to put on a few events locally that were a bit different from the norm, such as Attack of the Killer 45s – which is funk, soul, hip-hop & dance grooves at The George 2nd.  Then there is Luton Soul Club – playing soul across the board, all on original vinyl, which has been attracting people and DJ’s from all over the country.  It’s at Luton Pool & Social, which is now under the new stewardship of Dave & Mike (top lads) and will soon undergo a long awaited name change.  With all the events, I love how we all help to keep Luton’s varied night life going.

How has Luton’s nightlife changed over the years?

There’s a wider, more varied choice now than before, but losing the venues and bars to hold events can be a problem.  However I’ve found a cracking venue in Luton Social Club on Guildford Street.  Everyone who goes there loves the place, but people just don’t know it’s there! Hopefully we can put a spotlight on it as Luton Soul Club is booming there at the moment.

When are the next Luton Soul Club events?

Most of the events are on a Sunday 2PM till 9PM.  We have two of those left this year on 1st September and 17th November.  We also have 2 Saturday  alldayers, 2 till late on 13th July & 28th December.

For the non-converted, what’s so special about vinyl?

There is no other way to hear music, apart from live!  Most of the music events in this scene play original vinyl only – you can get reissues, but that’s a different subject all together. I’m OVO myself, so it’s hard to get the records due to the age of them.  It’s a hunt to find one and the cost can certainly put you off.  I’m going to DJ in Detroit and Chicago in October, so hopefully will get some good finds over there!