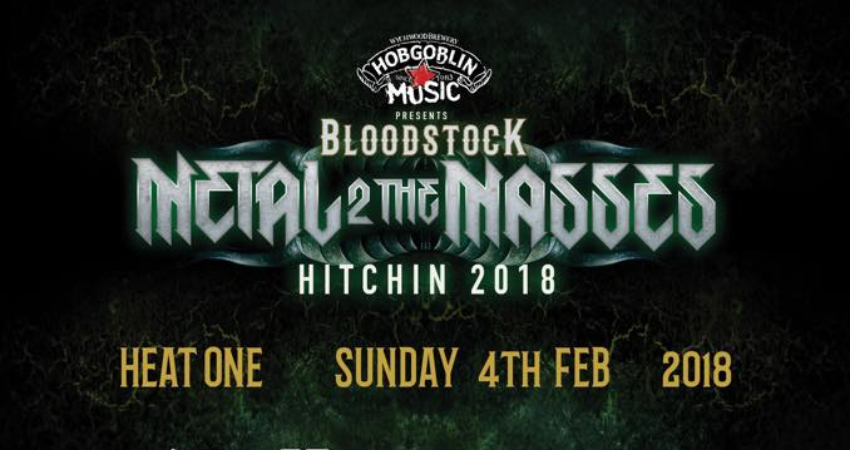 In a time where more and more live music venues are closing, the opportunity for new bands to gig and get a little exposure is diminishing, like my appetite at the sight of this gigantic pizza in front of me. 2017, however, saw the inauguration of Metal 2 The Masses Hitchin, a battle of the bands competition like no other, providing a colossal opportunity for any band who wants it enough. This competition stuck its middle finger up to the decline of music venues and opportunities for more alternative bands to reach a higher stage and in doing so, brought the metal community of Bedfordshire, Hertfordshire, Essex and further afield much closer together.

The competition itself is not new in concept or structure, but it offers a spot at the holy grail of music festivals; Bloodstock Open Air. The New Blood stage has been integral to the festival since it first started in 2005, providing a higher platform for breakthrough acts to reach greater audiences. The Hitchin leg of the journey consists of 8 heats hosted every Sunday night from 04/02/2018 at the hallowed ground of Club 85, showcasing 4 bands a time. 2 bands per heat progress through the competition, which are chosen through a split 50/50 vote, 50% audience vote 50% judges vote. (No more bands sitting in the garage with several PAYG phones texting in until their thumbs are swollen.) The 4 quarter finals and 2 semi-finals are structured much the same. In the Grand Final, however, (which will be held on Friday 1st June 2018), the decision is made by one man, Simon Hall, singer and Bloodstock and Metal 2 The Masses champion. Simon has been working for Bloodstock Open Air since 2009 and has been violently waving the flag for breakthrough acts ever since. He has been looking out for bands who warrant the break they deserve. Since the competition’s inception, it has grown from only a handful of venues to what it is now; in excess of 29 venues over 4 countries.

For me, it’s not the prize that makes the competition so exciting. It’s the way the competition brought such a small community of musicians and metal fans together. I have never seen so many bands pulling together to help with equipment share, loading in, sound checks. People come from far and wide to witness such passion for the music and live performance. Last year the bands were pulling together to try and help someone attend one of the finals from Coventry, and the guy managed to get there! From Heat 1, to the grand final, I have not seen such hype being built up for any local competition ever! Let alone Sunday night gigs!

Metal 2 The Masses Hitchin is championed by Nicholas Plews. I had the chance to ask him a few questions;

What inspired you to organise a Hitchin leg of M2TM?

“For me it naturally progressed towards this stage (no pun intended), after my old band Aghast won Metal To The Masses London back in 2010, in a venue which is now a coffee shop. Playing Bloodstock 2010 was a truly amazing experience and it really gives you a kick up the arse. Everything from the performance, organising press and being involved in interviews. Making the most out of an opportunity and using it to move to the next level. I think like most things, it takes a while to sink in and you can look back and see how much you and the band had improved since the win.”

He said that the progression from performer to promoter was natural,
“Utilising the experience I have of playing and working at Bloodstock, to the years of playing in the local scene in Hitchin and at the best venue for miles; Club85. This venue is special to a lot of people. It’s definitely special to me. Without it I don’t think I’d be involved in music as much as I have been. Nor would I have met the interesting characters I call my friends. Supporting this venue and venues like it is paramount. Too many are disappearing. We all definitely saw an rise in attendance figures during and post-M2TM, so I like to think this competition gave the local scene a bit of a boost and I want to keep this going.”

Was the competition as successful as you’d imagined?

“More so. I knew it wouldn’t be shite because the metal scene in the local area can be very supportive, but, you only really see it when the right band works with the right promoter. It takes two to tango. Bob Mardon of Club85 and I are providing the venue and the events, but the bands put that extra effort in to get fans down to vote for them. These are far from your normal gigs! All of the judges for all of the heats, quarters and semi-finals; a mixture of music fans, members of bands not involved in the competition from the local scene and surrounding areas, all contributing to the atmosphere, all creating the buzz which is felt throughout the events. That’s what it’s all about. I get the pleasure of compering and trust me I feel the electricity in the room.”

What can you see for the future of M2TM and M2TM Hitchin?

“Our two winners from last year – Raze The Void (New Blood Stage) and Everest Queen (Jäger Stage)… more of that please! If you attend the semi-finals and grand final this year then who knows, maybe you’ll see them again?”

“As long as there’s a Bloodstock, as long as there are rock and metal bands out there wanting to better themselves, their music and their art then there’s a strong future for M2TM nationwide and overseas. As long as people embrace this opportunity and look at the bigger picture then there’s no stopping it. Last year I had a number of band members approach me, none of whom had won or even got to the final, to thank me for having their band on M2TM Hitchin. They saw how much it made them up their game, improving their performances but also honing their communication skills. Their ability to jump at a chance to network, to book more gigs, to make something which they have created reach a larger audience. If you enter this competition with a ‘battle of the bands’ mentality then it isn’t for you. The amount of support I’ve seen for bands FROM bands was humbling and I’m seeing it already in the build up for M2TM Hitchin 2018. Keep up the positivity and keep the booze flowing! (I’ll have a Guinness please).”

I preach, passionately, on behalf of the bands, the metal community, and the people who love live music. Get to Club85, support the local scene and venues, enjoy the incredible musicians and live performances and have a spectacular time doing so.

Metal 2 The Masses is occurring are various venues across the country. Visit www.bloodstock.uk.com for more information.