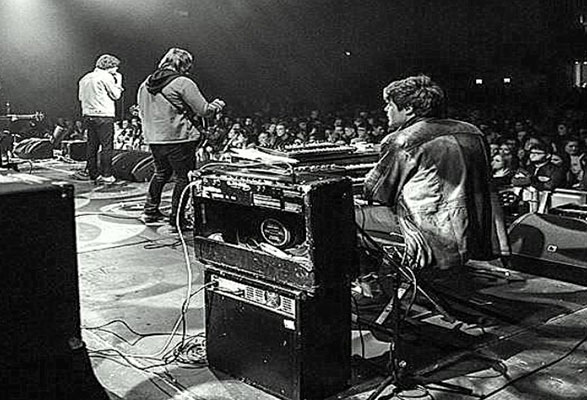 The Horn has long been one of the more revered and reliable live music venues residing in the surrounding area. A favourable little stop off for bands touring the country looking to accumulate enough support to eventually get that shot at one of London’s prestigious and higher capacity venues, to have a “were you there moment” at Kentish Town Forum  before the march onto even bigger things. And yes it also has a lot of tribute bands.  Tonight St Albans is keeping it original aided by promoters Juicebox Live. Scottish melody makers Neon Waltz are popping in to fill the modest sized room with their cathedral sized sound.

The opening track from their excellent debut album ‘Strange Hymns’; ‘Sundial’ bursts into a carnival of musical light and colour. If ever a band suited their name it is Neon Waltz.  Hailing from John O’Groats, you can hear how the terrain has played its part within their songwriting.  Embracing all the wild beauty which can be found in that remote part of these isles.  It is that disconnection that has enabled the band to forge their own path and encourage their imaginations on songs such as the retro cool ‘Bare Wood Aisles’ and ‘Heavy Heartless’, a spine tingling ballad for the ages if ever there was one.

Neon Waltz create an enchanting wall of sound which cascades from the stage and if you choose to you can take the step into their world.  I found it impossible not to.  Gladly crossing the threshold to immerse myself in one of the UK’s most special bands.  They possess the hallmarks of Scottish greats such as Teenage Fanclub, Idlewild and Belle & Sebastian without sounding directly like any.

With the crowd won and the night drawing on, singer Jordon Shearer who’s fringe has a presence all of its own, signals that two songs remain.  Anyone disappointed with the set coming to its conclusion are soon more than compensated with two tunes that deserve anthem status.  ‘Dreamers’ soars like an absolute classic with the chorus encouraging “You should do what you love while you can”.  It doesn’t matter that there’s only a few here to hear it.  Those present take the words in, warming our hearts on this cold February night before the firework that is ‘Bring Me To Light’ ends a world-class set.

This tour is seen by the indie six-piece as a sign off from their debut album as they look to move onto the next stage of a career that if there’s any justice will see the band scale great heights.