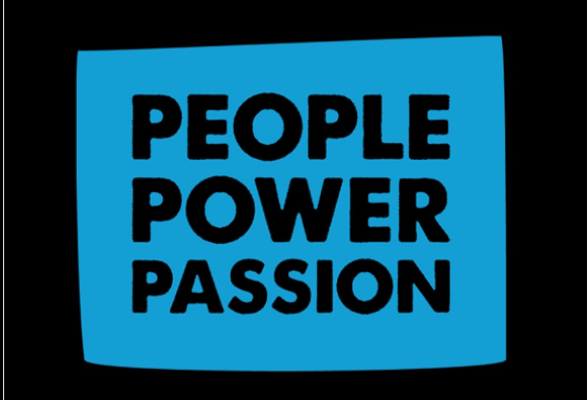 The big issue with outdoor events is that, especially in Britain, especially where Luton sits in Britain, and especially when you most want it not to, there is always the risk of rain. The People Power Passion event, which marked a hundred years since Lutonians stormed the town hall and burnt it to ash in a protest against the poor treatment of first world war veterans on their return to the town, had particularly bad luck in that respect. After almost a week of glorious (if not slightly too warm!) weather, the skies clouded and it rained quite heavily. For a moment, it seemed like the event might not happen at all.

Luckily it did, as it was a packed celebration of what makes Luton so special. Spanning over 80 minutes and combining new work with examples of creativity from across cultures, generations, and postcodes, the whole thing felt like a celebration of the spirit of the town. There was great work to see from artists who are embedded in the town’s creative scene, from the very specific dance flavour of Perry Louis and Jazzcotech, to the beauty of movement from Kali Chandrasegaram of Kadam, from the excellent contributions throughout the night from NGYT to the ringing sounds of the Revellers Steel Band and many more. It was also wonderful to see emerging artists take the stand as well, a particular highlight being Tychique Ciamala’s impassioned spoken word in the #blacklivesmatter section.

The audience started quite small, but grew over the night from a couple of hundred to one and a half thousand, despite the rain. I suspect many of the first to show were there for the reunion set of the brilliant UK Decay, whose songs still feel as fresh as ever. For My Country in particular set a tone for the night and had everybody singing along. 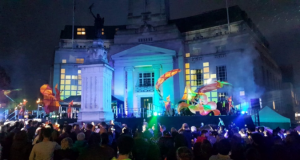 One of the first acts was local poet Lee Nelson, who recited a poem he had previously written about the event. When he started, he had to hush a heckler or two, but by the end many of the audience were on his side. And it’s a real testament to the town that with every new performer the crowd grew in their trust of the event, their investment in what was happening, and I saw many of those sitting on the sidelines making comments end up in the thick of the crowd applauding.

There is a sense to me that a lot of people hide behind their cynicism when it comes to the town. There are a lot of people that tell us that Luton Is Shit and tell us it loudly and often, and it’s easy to either play along or get defensive or jaded about our home. What struck me at the end of the piece, as the rain was still lightly falling over 1500 Lutonians, was the sense of togetherness, uniqueness, and pride that radiated from that square. There is no other place like Luton, no people like Lutonians with all our differences, struggles, and pride, and that is a wonderful thing.