The soundtrack to back-to-back promotions for Luton Town Football Club,  Rylands Heath talk to VB@H about where they’ve been, where they’re heading and their love for the town.

When did Rylands Heath form?

We formed in the summer of 2016 in a roundabout way. We’d been in another band previously then it evolved and eventually we found ourselves just writing some tunes. That was all it was meant to be at first! Just a songwriting partnership sort of thing. Then things moved on and we launched as Rylands Heath in January 2017 with a load of songs ready to shoot out to the world! 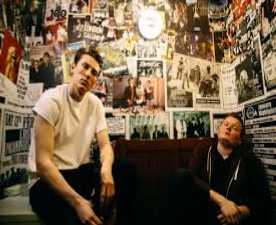 You’ve had quite an eventful journey already.  What have been the highlights for you so far?

We definitely have! The obvious ones to pick are performing at the Royal Albert Hall and performing at Luton Town FC’s two promotion events over the last couple of years. All 3 of those gigs have been immensely special. We’ve seen how much we’ve grown since the start and being given the opportunity to play those massive shows as a small band is really something else. We love playing live, it’s definitely our favourite thing to do as a band, but we’ve had some great times in the studio, on writing trips and so on too. We always have a great time!

It’s been a great season for LTFC not only winning promotion, but getting planning permission.  Just how important do you think the new stadium, including a music venue, is for the town?

Oh it’s going to be vital! It’ll be such a facelift for the town and hopefully a new hub of entertainment in general. The talk of a music venue is obviously exciting for us as there’s such a lack of music venues in the town. There’s some fantastic promotors around who haven’t got a huge selection of venues to choose from.  Hopefully with the Hat Factory reopening soon with a facelift of its own they can work together to bring in more of a vibe for live music in the town.

There’s currently a wealth of great talent from the surrounding areas, but not many bands from Luton itself. What do you think could help Luton to grow and encourage more talent?

Yeah there’s loads around us but it becomes a bit of a head scratcher moment thinking of who else is currently brewing in Luton. Across the board Banton, Ryussi and others like JW Paris spring to mind from the Luton lot (I’m sure there’s more, sorry if I’ve forgotten you!) but I could give you a huge list of acts from Bedford and St. Albans for example who are all doing bits right now. I think what we’ve said about giving the promotors some more decent venues will help. Just some more consistency with it really – Look at the Bear Club – That’s so successful because both the quality is so high and people KNOW that it’ll be open every Saturday and Sunday. People go down knowing something will be on so there’s always a buzz. People like you guys, Transmission and Love Moore are definitely doing their bit to get the buzz going in Luton, but we need more from elsewhere!!

Which local artists should people be checking out?

This is always the question where we make or break our friendships with our mates hahaa! We’ve mentioned Banton, Ryussi and JW Paris who are all from Luton, but if you look out a little bit further we love the likes of The Scruff, Naked Next Door, Lacuna Bloome and our absolute BABES Only Sun who are making some sick moves at the moment.  They’re all immense artists in their own right and if you like a bit of Rylands Heath, the chances are you’ll be into a few of those bands too. Top stuff. 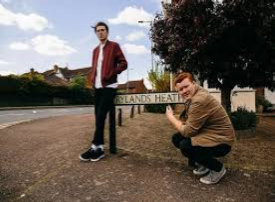 You’ve released a long list of singles already. How do you feel you’ve developed as a band throughout that time?

It’s mad! Our latest single ‘Work of Art’ is really, really how we want to sound. A lot of artists will work for an age before releasing anything to develop their sound and vibe but we’ve kind of shown everyone that journey. Songs like ‘Do What’ and ‘Coming on to Me’ were some of the first we wrote and looking back we’d do a lot different to those tracks now.  We appreciate the journey; being able to share it and get people’s opinions on those early tracks really propelled us to where we are now. Just keep your ears peeled for our next few releases as we’ve got our formula now and it’s only getting better!

What are the plans for future releases?

We want to put at least one track out before the end of the year. We’ve wanted to focus more on the other side of things in 2019, as we’ve released so much music over the last 2 years that we think there’s enough for people to keep occupied with.  We thought there’s not much point at the moment in churning out song after song and thought to just let what’s out at the moment gain more momentum and play some great shows alongside it. It’s working out really well and we’re just enjoying it all at the moment. But yeah, definitely a single, maybe more before the end of the year!

Which live shows do you have coming up?

We’ve just been announced as Headliners at Hightown Festival on 6th July! – Well, we’re playing last on the main stage so we’re going to take the title of HEADLINERS and run with it!! haha!

That’s going to be so fun as we’ve never played that festival.  I’ve been involved in it in the past and always wanted to get on stage! It’s super local as well of course, so hopefully we can get everyone down for a massive party, then have a pint in the Brickies afterwards. Waheeeeeyyy!

We’ve also just been announced to play Wilkestock on 1st September which will be a nice round off to the Summer!  We’re always announcing more shows so keep an eye out on our socials for more.

Luton gets a bad press and you’re a band who take great pride in the town.  How would you describe Luton to someone who has only ever heard or read the negative comments?

I unfortunately find myself having to stand up for Luton quite a bit, having to convince people to not believe all that shit!  We’re both massive supporters of this town. We were both born and raised here and know how positive it is. The bad press it has got is so unfair.

Once people actually come and see the town, see what it’s about, see what it has to offer, I’ve only ever had people change their negative minds. We’ve had some horrible names, jokes, journalism and organisations try their best to tarnish the town, but we’re almost there out the other side with more and more people seeing it for what it really has to offer. Let’s get that new stadium built. That’ll bloody help!