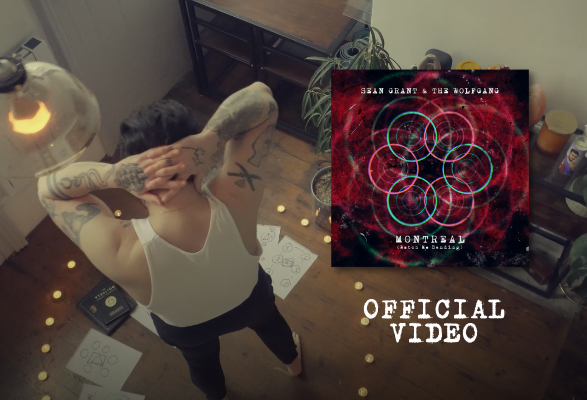 Watch the provocative video for Seán Grant and The Wolfgang’s stunning new darkgaze single ‘Montreal (Watch Me Bending)’ – a cinematic exploration of ancient wisdom, mysticism and the esoteric wonders that organised religion doesn’t want you to know.

The single, which was released via Vandalism Begins at Home Records on April 8, is the climactic, consciousness-expanding first cut from forthcoming album, ’333’.The video, directed by Jack Decent, sees Seán Grant play a priest emancipating himself from rigid theology as he delves into the diversity of divinity and existence.

Central to the single’s album artwork and the climactic crescendo of the video, is the Seed of Life symbol – a geometrical design of circles and the building block to the Flower of Life, famously used in Da Vinci’s Vitruvian Man drawing.

“For Leonardo Da Vinci, that was the seed of everything,” says Seán Grant, of the circular motif, which has profound symbolic meanings for the interconnectedness of our existence, life on Earth, and the formation of the universe.

And the music video is laced with other symbolism, from the Fibonacci Spiral to the Golden Ratio, plus ancient philosophy like The Kybalion.

The frontman adds: “I think there’s a lot of power in ancient texts, like the Bible, but to just completely believe in what that says and not consider anything else in nature and patterns, I think that’s where we fall down with organised religion. So, I think it’s important to gain all aspects.

“To discredit it is wrong, but to completely believe in it is also wrong. So, in this video, I’m challenging the way things are. I’m not discrediting religion, but there are definitely religious references, and not just Christianity.”