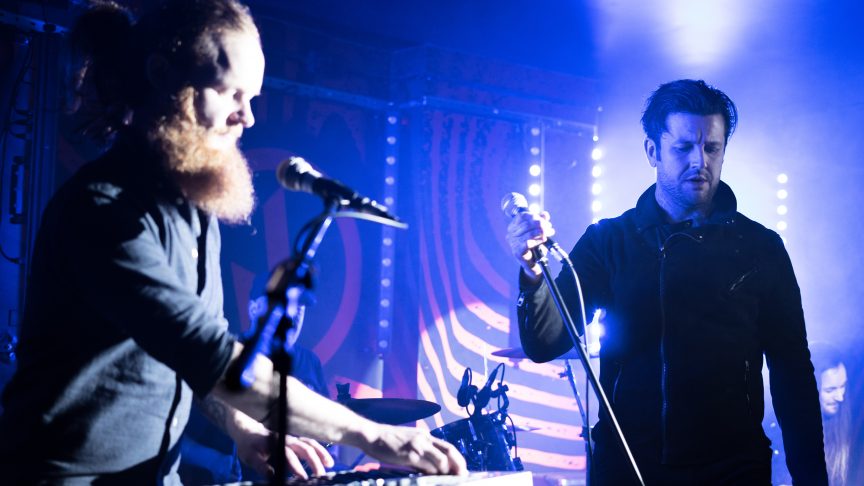 Seán Grant and the Wolfgang unveil the new video for their latest single, ‘Crucify My Hurt’ – which provides a live teaser of what’s to come.

As the second single to be taken from the forthcoming album ‘333’ – which came out on Vandalism Begins at Home Records on July 8th – the video is a collection of live footage shot by their FanGang on the packed out Leave The Capital UK tour earlier this year.

The grassroots music initiative saw Seán Grant and the Wolfgang rip it up in venues across the land, where ‘Crucify My Hurt’ opened their set and introduced new audiences into the mysterious lore of these denizens of darkgaze. Talking of the track, Seán Grant said: “It’s about opening your mind to greater possibilities around you.”

You can read more about ‘Crucify My Hurt’, a song that rides a synthwave of iconographic inquisition and dabbles in deep think, psychedelics, Egyptology and religious symbolism.

And the band, which since the Leave the Capital tour has joined our Vandalism Begins at Home family, are set to hit the road again on a mini tour of intimate venues to mark the release of their next long-player, ’333’, which also features the mind-melding first single ‘Montreal (Watch Me Bending)’.

Seán Grant and the Wolfgang celebrate the unleashing of ‘333’ with an intimate and exclusive show in their hometown of Newport Pagnell, at The Cannon on July 15th.

Seán Grant said: “We can’t wait to get back on the road again after the glorious chaos and carnage of the Leave The Capital tour in February and March.

“We had the time of our lives and, for those that were there, they can relive those good times through the live footage that was captured on tour and compiled into the video for ‘Crucify My Hurt’.

“We can’t wait for people to hear the new album, ‘333’, and to then share it first in such a live intimate setting as The Cannon, which almost starts this upcoming tour where the last one left off.

“The people of Newport Pagnell and Milton Keynes turned out at MK11 in March and we’re still humbled and grateful for their spine-tingling reaction, which you can see at the end of the ‘Crucify My Hurt’ video.

“That was the end of the beginning and a new chapter is about to start.”

Support at The Cannon comes from new label-mates Luna Rosa, who also tore it up as part of the Leave The Capital UK tour.

But with tickets high in demand and almost sold out for The Cannon, Seán Grant and the Wolfgang have added a second date the following night at Vandalism Begins at Home headquarters, The Castle in Luton, on July 16th, supported by Future Primitives and Carbon Daydreams.

Seán Grant and the Wolfgang and Luna Rosa will then return to the triumphant scene of their first Manchester show together at The Castle Hotel on July 22nd, before rounding off the tour on the Camden Rocks All-Dayer at The Fiddler’s Elbow on July 30th.

These shows are not to be missed, so pre-book tickets to avoid disappointment.

All pre-booked tour date tickets will get you an advanced listening link to hear the new album, ‘333’, before anyone else.

There are also gig ticket and ‘333’ t-shirt packages that unlock the exclusive, limited edition price of just £6.50.

Alternatively, full price ‘333’ t-shirts will also be available to buy for £15 at the album launch tour dates.