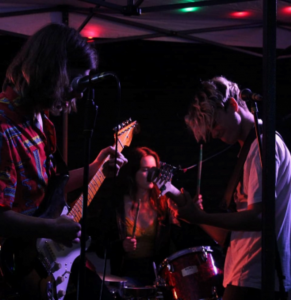 With the sun having set and the stage lights on, a midge storm of biblical proportions engulfs headliners WIINK.

They’re clearly not a squeamish bunch, as the trio push through the bug attack to round off a successful day of The Fighting Cocks Festival.  Perhaps the all consuming swarm of our insect friends was inevitable when holding an outdoor, summer, music event at one of England’s oldest pubs within the green, picturesque surroundings of Verulamium Park.  WIINK, St. Albans natives, certainly deserve a hero’s applause for not only resisting temptation to run for cover, but for also delivering an eclectic set, steering from Pete Doherty influenced skiffle, to more blues based material and some joyous lo-fi in the guise of latest single ‘Grassman’.

Organised by Empty Events, the free entry festival offers a platform for young, up and coming talent – the majority of acts being between the ages 16 to 25.  One band present today with a big future are SINKA – a powerhouse trio who specialise in dark and stormy.  Latest single ‘Fussy’, which has received Radio One airplay, would wrestle Royal Blood and Muse into submission and the band are an eruption of high energy throughout their set with bassist Matt Smith playing on table tops, as vocalist Shaun Sewell-Sears tangles with his guitar as if holding a python. 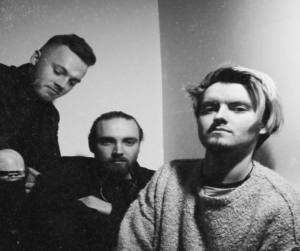 One thing’s for sure, the Ye Old Fighting Cocks isn’t cheap, and a full day spent there will leave you light on change, but there’s no denying it’s a great place and family friendly, with children enjoying the balloon animals and face painting activities, as well as some superb, enthusiastic air-guitar playing from toddlers, who may just turn out to be future rock stars influenced by musical celebrations such as this.

There’s promise of plenty more to come from Empty Events.  Jack Lawrence said, “This is just the start for us. We will continue to support young talent and put on even bigger and better shows in the future”.  The plan is very clear and Empty Events are aiming high. You can peruse their busy schedule on their Facebook page.