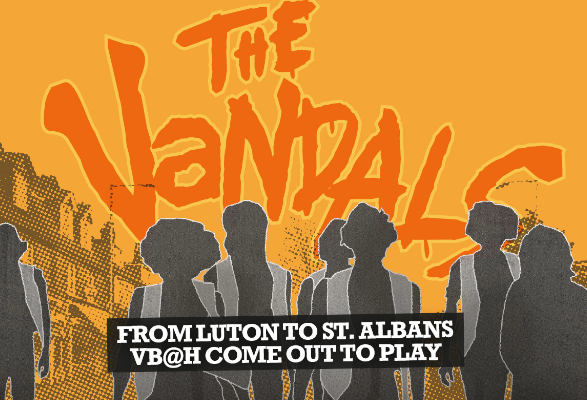 Travelling seven deep, we leave our spiritual home in Luton, The Castle, to venture into St. Albans. Have you seen the film ‘The Warriors’? It’s a lot like ‘The Warriors’. What could have possessed us to make this dangerous, potentially life threatening decision on a Thursday night you ask? Well, we’ve come for The Barrys, after impressing with their drunk, folk-punk in Luton earlier in the year — and some things are just worth the risk.

It’s a bit of a showcase night at The Horn, four acts of varying sounds, and as it transpires, varying degrees of talent. Solo artist Walshie has a wonderful self-deprecating sense of humour, but this outweighs the quality of his songs, of which although show glimmers of lo-fi loveliness, are difficult to separate, and what begins as charming becomes a slog to watch. Sonic Kimono do not have a wonderful self-deprecating humour. Headliners, or at least, final act, The Fishes & I can play, but are obsessed with replicating their heroes. The vocals taking in Liam Gallagher, Kurt Cobain and Michael Stipe on different songs. It was however enjoyable to sing along to ‘Sandstorm’ by Cast. Even though they did not play it (technically).

So, on to The Barrys! Things had not quite gone to plan at Bedford Esquires while supporting John Otway a few days before, but all that means nothing today, as the band put in a fabulous performance. The chemistry between the 4-piece is a joy to watch and second only to the chemistry they have with the audience.  With the room fully on The Barrys folk express, everyone’s treated to the sentimental beauty of ‘Day in May’, the wit of ‘Hitchhikers Blues’ and the politically charged ‘Keep On’. The songs and themes land throughout the set and its clear that a bigger audience awaits the band. Liam Burke is a classic frontman, writing classic songs along with brother James, with the perfect companions in Mary and Larry with top drawer violin playing and percussion work. It’s a beautiful thing when something special comes along, with a personality all of its own. If you want what The Barrys offer, then The Barrys you shall have to see.

With two members of the gang seemingly missing, presumed in kebab shop, these warriors make theirway to St. Albans station with smiles upon our faces and a skip in our step, looking forward to the next quest we shall certainly take to get our Barrys fix. Can You Dig It!?!