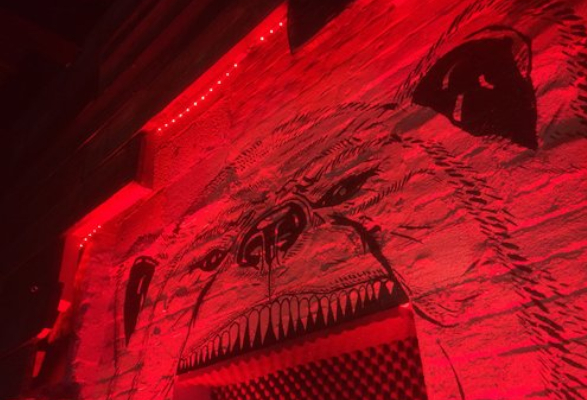 Any lingering notion that the bear Club may not have put Luton on the jazz map must now, surely, been obliterated. The most feared, alien music form has a real hold in our town, which the jazzers among us realise is a precious thing.

“The Happenin’ Jazz Festival” a free celebration of the Club’s fifth anniversary, brought together some heavy weights from  the UK’s jazz scene, including Paul Jolly, a most excellent Lutonian, 33 Records honcho and rather good saxophonist.

This was a whole day affair. In from unseasonably brilliant weather outside, peering and immediately thrown by the club’s rearrangement. The musicians have been peeled away from the live area and into the middle of the room. This is 360 degree immersion and the first of a few jolts, all of which add to the occasion.

The next was this thing that musicians do. Not bands but musicians, some of whom hadn’t met each other, let alone played with each other before — who are pulling tunes together, for all to see, to perform that evening.

Which, later in the evening, is excellent. The roaming film and camera teams had been alienating in the afternoon, though they unobtrusively go about their business. As an audience member, I feel pleasantly relaxed into a working experiment of wonderful music and a working film set.

The music? Well, some people like jazz, some don’t. The aforementioned Jolly dipped in and out and was excellent. As were Josephine Davis (sax), Nigel Price (guitar) and both Liam Noble and Kate Williams (piano). Larry Bartley (double bass) and Gene Calderazzo (drums) handled the lion’s share of the rhythm early on, mixing cool elegance (LB), with snapcracking exuberance (GC). All the players deserve massive respect and credit, though most kudos, of course, goes to The Bear, for pulling the whole thing together and playing a very assured MC role.