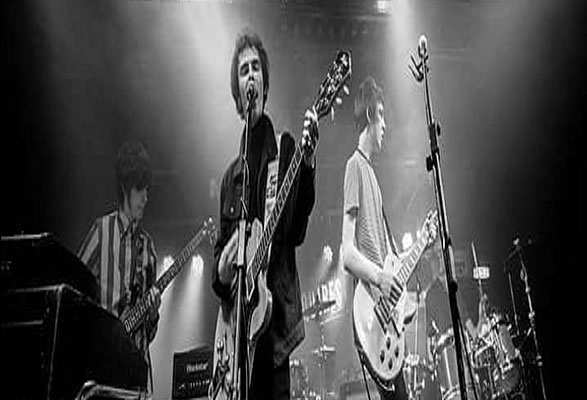 The St. Albans ‘Battle of the Bands’ is in full swing with weekly rounds of musical talent showcasing what they’re capable of in order to progress and be crowned The Horn’s ‘Battle of the Bands’ winner 2018.  Cue bugles!  The voting system is clear enough with each reveller given a ballot slip on the door.  Bring enough friends and you’re in with a shot.  Billy & The No Mates might want to sit this one out.

Playing tonight there are two acts from Luton, Another Forgotten and Ill-Informed, plus two from Northampton.  However, before you jeer and hiss the Northampton bands at their every mention in an act of defiant loyalty to our town and blindly call them “cobblers”, I will point out that only one is competing in the competition, The Keepers.  While the other, Sarpa Salpa, are merely here to show off.  Also it’s not very sporting of you so just behave and play nice.

The four strong Sarpa Salpa have been causing quite the stir around the live scene and I have heard whispers that they may just be onto something big.  Powerful and slick it’s clear to see why they’re pricking up ears and gaining attention.  Armed with potential hit singles, their twist of indie-pop disco is an anthemic tonic of chiming guitars, heavy synth and a pulsating rhythm section which all works as the perfect backdrop for the incredibly impressive soulful vocal.

There’s a definite star quality to the band who appear to have what it takes to start moving their career up a few levels.  Yes it’s all very shiny, almost neon in fact, recalling big chart hitters like Bastille and there’s definitely a Radio One beach party with their name on it, but if that’s your thing, get your shades on, put on your dancing shoes and get onboard with these lads.

Luton Hardcore-metalers Another Forgotten open the business end of the night looking to win a place in the semi-final.  Or so I would have believed if it was not for the appearance of a band who really look like they would rather be anywhere else.  Is the Great British Bake Off back again or something? Are they missing it?

I know they’ve reformed after a long hiatus but I have rarely seen a more reluctant looking vocalist as I witness tonight.  There’s some impressive riffage and time signature work on display but it’s incredibly difficult to engage with a band’s music when they appear to be totally unmoved by it themselves.  I think tonight came too soon for this one.

Something of a punk patchwork, Ill-Informed not only thread an array of heavy rock influences together (grunge, post-hardcore, math) but the performance is one of conflict and contrast.  When they’re good they’re great, when they’re bad they’re pretty shambolic and this is all in the one half hour slot, which they jokingly, possibly seriously, insist they can’t fill.  “All our songs are very short” quips charismatic lady in pink Laura Hill, singer of this ragged, yet when on point impressive trio.

‘Si, Yes’, “the one we always mess up”, is a storming song that encompasses the best of the band.  There’s enough crunch from the guitar to justify the lack of bass player which is not always the case with their set, and Laura Hill does what she does best. Plays the rock star.  There’s even a bit of rule breaking when the band cover Toto’s ‘Africa’ or as they put it “that hardly counts as a cover”, given the nature of their interpretation.  One that is definitely within the rules is finale ‘Musical Statues’.  Play everything like this and Ill-Informed will be a force to be reckoned with.

The Keepers. These fellas certainly look the part.  All dressed up and with a place to go.  The semi-finals if their songs can match the quality of their threads. Looking straight out of Carnaby Street circa 1964 there’s no surprise their sound is steeped in Mod nostalgia.  Unfortunately with lines such as “I want to fly with Lucy in the sky”, there’s a big whiff of cliché and over indulging on their influences.  There will be a 40 something guy in an Ocean Colour Scene t-shirt that will tell you that “This is real music”, but it’s not.  It’s a pale imitation of it.  The Keepers could certainly do with letting go a little and finding themselves a bit more.

This all said and done, the only opinion that matters tonight is those of the collective crowd. With the voting slips in and counted, The Horn announce who will progress to the next round.  As it happens I voted for the winner tonight, Ill-Informed.  I had a quick chat with the victors and pressed them for some words of reflective glory, “We got real lucky” the response. They’re not wrong, then a little luck did no cup run any harm.

The competition continues and all details can be found at www.thehorn.co.uk