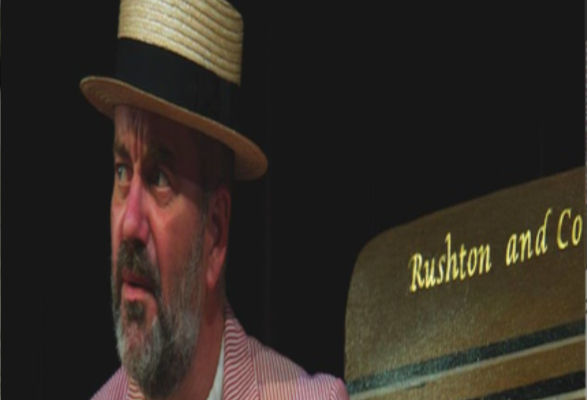 Check me out, all cultured up going to a play on a Friday night. It’s been about 40 years since I last went to the Library Theatre and while I can’t really compare experiences, the theatre certainly looks smaller than it did then, like visiting your old infants school classroom and marvelling at the tiny desks within. 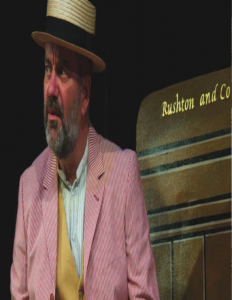 I am very familiar with the book upon which this play is based and since I first read it a few years ago, I have built up a great deal of affection for the characters in the book, both good and evil. There’s something so authentic about the way the relations between the different actors in the story are expressed, in particular the description of ‘The Beano’, the workmans yearly day out that ends in tears, violence and drunken despair. The descriptions of the pub and its inhabitants, the hypocrisy of the church, the terror of poverty, the sham of democracy and the way ordinary people are divided and ruled provides a clear comparison with our declining standards today and a lurid window into the future if we don’t chuck the bastards out.

So how does this play compare? This is a one man show, performed by Neil Gore and, given the amount of characters and the vastness of the book (it’s huge) he does an pretty good job of getting the bare bones of the story across, literally donning the various caps of the main protagonists as they congregate on their break in an early scene. The performance is interspersed with songs from the era (around the turn of the 20th century) which are fun and the highlight is the explanation of ‘The Money Trick’ which involves a bit of audience participation and gets the message across slightly better than the book, being less encumbered by narrative expediencies. Neil himself is an affable presence when not in character although I found him a little bit too ‘roll up, roll up’ for my taste. 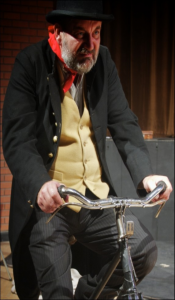 It’s hard for me to tell what impact the play would have on someone who was wholly unfamiliar with the book. I found myself internally criticising his characterisations of Hunter and especially Rushton who is portrayed far to effetely and his Bob Crass was also a bit off, while the ‘good guys’, Owen and Barrington are given a saintly odour that, again, grated with me. However this is almost exactly like seeing a favourite book turned into a film; the internal figures you have built up in your mind of the characters and their personalities rarely correspond with someone else’s impressions and the previous few lines should be viewed with that in mind. As mentioned, it’s a massive book which deliberately takes a long time to chronicle a year in the lives of the inhabitants of Mugsborough and distilling this down to a two hour play will

So does the play succeed in getting the message of the book over, a message that can be summed up in the following quote :-

‘“No one had any right to condemn him for this, because all who live under the present system practise selfishness, more or less. We must be selfish: the System demands it. We must be selfish or we shall be hungry and ragged and finally die in the gutter. The more selfish we are the better off we shall be. In the ‘Battle of Life’ only the selfish and cunning are able to survive: all others are beaten down and trampled under foot. No one can justly be blamed for acting selfishly–it is a matter of self-preservation–we must either injure or be injured. It is the system that deserves to be blamed. What those who wish to perpetuate the system deserve is another question.”

Well, in the main yes but it does need a summation by Neil Gore after the story has actually finished to really cap it off. The actual end of the play is very weak, comprised as it is of a speech by Barrington. This perhaps reflects the schizophrenic nature of the books ending, where, having railed against the system for 600 pages, the coming winters’ problems are solved by the easy expediency of some aristocratic money. The speech itself is fine but disembodied as it is from the larger narrative it comes across in isolation as rather pat sentiment. But, as I have said, maybe these criticisms are unfair coming from me. The play as a whole is enjoyable, Neil Gore is an engaging host and I think he does the best he can, given the constraints described above. I think as a stand-alone play it was average at best but if it can get people thinking about contemporary issues in a historical light then so much the better. I think it does this, just.  Of course, the best option is to read the book or listen to the audio book, a free edition of which can be found here.