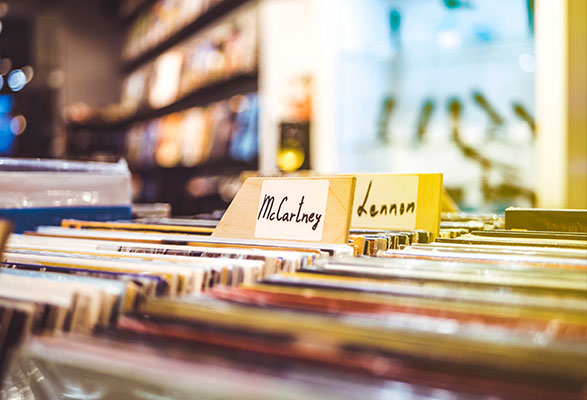 This all came to fruition because I recently received a knock on my door from my postman. No doubt what was being delivered was a promo 12 inch copy of Morrissey’s debut single Suedehead . The postie happened to be an old friend who shares my love of music, we chatted and I agreed to write about my love of the black stuff.  I’ve collected records since I was 14 when I bought an old Dansette player for 50p at St Annes church jumble sale. This was replaced by an upright model that fitted in to look like a piece of furniture. It had a smoked glass door. Funny how I remember all the record players I’ve had as well as my parents Hitachi one even though I can’t remember it ever being used.

So, on to vinyl, a term some collectors hate, preferring records, 45s, 12 inches and LP’s.  It’s the format I grew up with, it just sounds right, the way music was meant to be listened to. I never really accepted CDs yet I had to as the record companies changed over. The cost of an LP was higher than the CD and the vinyl pressings tended to be more flimsy and cheap, just produced as token gestures. Albums released on vinyl from the early 90s until about 2010 are highly sought after. Then there was a resurgence and vinyl took off again. Record store day started re-releasing albums that would cost a pretty penny on first press, internet sites selling vinyl in the millions started popping up.

My first taste of picking up something out of the norm was cycling down to F.L. Moores /Record City to flick through the stacks of 12s and LP’s . I’d really got in to The Smiths and they sold white label promos. A bit more expensive than the regular versions, I knew these were produced in the 100’s rather than standard 1000’s . Given away to promote bands these are rather bland records with no artwork and handwritten details of the music on the disc and sleeve.  They intrigued me. I still have all of these, and they are quite sought after. Pricing all depends if there is a demand and not necessarily how many were made. I’ve got a 7 inch acetate of an Average White Band single I paid £12 for. If it had been a Stones, The Jam or the Sex Pistols one I wouldn’t have found it on eBay in the first place and they would be in the thousands of pounds. Oasis and blur from the Britpop era are very popular and command a high price but Happy Mondays also of that scene go for next to nothing. Acetates are proper test pressings; only a handful exist and they are not as hardy as regular vinyl. You can only play them a few times before the quality of the recording is severely compromised.

So why do I spend hours looking through internet sites selling vinyl looking for versions of songs or variants of sleeves or even different pressing plants? Not sure. I think it is solely for owning something out of the ordinary, made by a band I love. Most prized piece? Probably the 12 inch extended version of ‘Heaven Knows I’m Miserable Now’, which was withdrawn and it’s not known how many exist. Label times state the standard time but the song has an extra verse. Coming in a close second is The Adverts ‘Crossing the Red Sea’ on red vinyl. 500 were made back in 1977, I got mine signed by Gaye Black and TV smith at gigs. Then there are my gramophone records ‘Lucille’ by Little Richard and ‘Please Please Please’ by James Brown and the Fantastic Flames released way back in 1956. It’s hard to choose. Best places to shop? There are too many and also I don’t really want to reveal my sources but you can get a really good app for your phone, called’ Vinyl District’ that alerts you to record shops wherever you are and of course you should immediately go to ‘Vinyl Revelations’, on Cheapside, Luton, which is a record shop run by my good friend Andy Chesham where you can freely browse his extensive range of second hand vinyl.