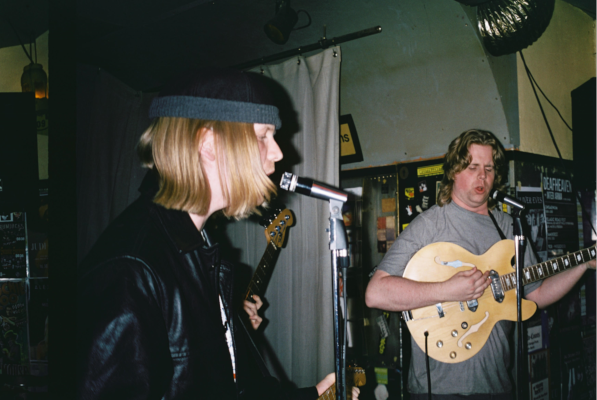 Purveyors of 60’s influenced California Sound and Mersey Beat, The Roves took their self-titled debut album on the road across Europe, stopping off in Holland, Germany and Switzerland.  Tom Wing shares that experience with us.

How did you decide to go on this tour?

The Roves went on this tour purely to promote our first LP, in the last gasp of summer before we go back in the studio to mix the second record. So watch out for Part 2 of The Eurosafari coming soon.

When we went on a little trip to Germany in May to plug the album, we had such a good time that we wanted to come back on a longer tour, and we were really lucky that it happened. It was very spur of the moment.

It was so much fun. I’m not sure what it looked like from the outside… probably no big deal to anyone else. Considering touring isn’t that hard to achieve IF you’re persistent enough to book it. But we had a fucking great time.

I don’t mean to be coy when I say that it isn’t that hard to achieve. Of course its hard to get on a tour, it’s just that a lot of unsigned bands do it, and obviously, its par for the course if you’re going to start playing music together.

The promoters and staff at the venues were very hospitable, friendly and treated us exceptionally well. We met plenty of interesting and funny characters, eccentric being the operative word. The smaller towns had the most personality. We got a kick out of it.

…and the size of the crowds?

Attendance speaking, the audiences were mixed. One night we might play to a full house and the next it might be 5 people watching us, but they were always very receptive.  People were enthusiastic about the group, they got into it. Which is always nice.

What bearing do you think the tour will have on the band?

I think it made us all tighter, not just musically speaking but in our relationship. Being on the road for that long in each others pockets either draws you closer together or splits you apart and I think we spent a lot of quality time together.

It probably helped that we all really like each other as people. Plus a close friend of ours called Felix Holt (who is also an incredible singer-songwriter I might add) was driving us around, and he was good company too. There were memories that I will cherish forever from this tour and plenty of laughs to go with it.  I’ve been on tour before with people I don’t get on with, and its horrible – you get used to thinking

I’ve been on tour before with people I don’t get on with, and its horrible – you get used to thinking that’s what touring is like, like a chore. This definitely wasn’t. Just going on the road has generated a bit of interest in us, I’ve seen a difference. Maybe it shows you’re a bit more legit if you get something like a tour under your belt.  Perhaps people are now taking the band a bit more seriously. I don’t know for sure, but I guess it bodes well for the future.

What are your thoughts on the music scene in Europe?

I suppose we only got a little taste of the music scene on our 8 or 9 days through the continent, but it’s marvelous. Maybe it’s just that we were away and it felt more like a holiday.  All I can say is that the treatment you get in Europe is far better than in the UK. That kind of goes without saying I guess. The treatment is always better for bands that play abroad, whether it be from the UK or to the UK from another place. A taste of something different perhaps.

So you would tour Europe again?

Definitely, as soon as we can, and we would definitely advise other bands to do the same if they get the chance. You’ll have the time of your life if everything is in the right place.

Any tips for surviving on the road?

Luck, that’s all I can tell you. We were extremely fortunate we never ran into any trouble. No breakdowns, no customs. It all went smoothly. We had luck on our side. Plus some good music and good vibes help. If the chips are looking down, don’t let it affect the mood and stay positive.