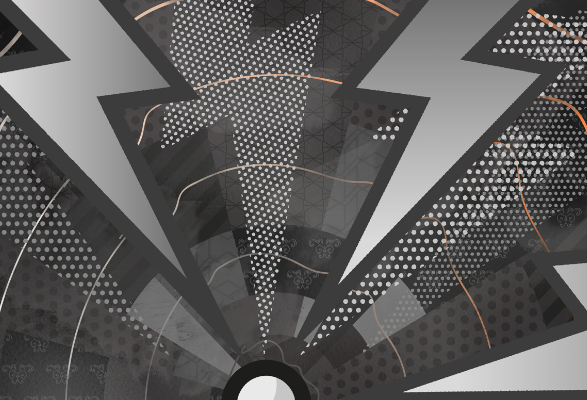 Transmission began broadcasting their indie / alternative radio show on Diverse FM at the beginning of 2018, not long after VB@H #2 was published. It was encouraging to find there were others in Luton who shared our passion and drive for local music and we struck up a friendship, in which both parties cooperate with their support for the local scene. Even if our tastes don’t always agree, it felt natural to co-promote some live events showcasing the brightest of up and coming talent, championed on the radio show and in the pages of this fanzine. 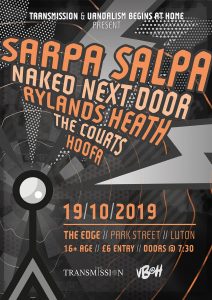 The first of the showcases is tonight, with a lineup curated by the Transmissioners. Until the recent defeat to Nottingham Forest, every time Hoofa had been played on the Luton Town match day playlist, the Hatters had been undefeated (17 games in fact). Something of a good luck charm, Transmission had always promised them a place on the bill should they delve into live promotion. Despite the name, this duo are not all kick ‘n’ run, instead they are a cultured, synth-laden, 80s pop diamond formation which shines brightly in the dimly lit Edge.

With their debut EP ‘Chimes’ released the day before, The Courts have got plenty to sing about. In style terms their set is one of two halves; the first in step with the current indie-pop trend, and then things turn dramatically darker for the better. With more bite, the

latter half of The Courts performance ups the ante, and hopefully reflects where the band are heading. With all members in their teens, their ability surpasses their years, pointing to a big future for the Bedfordians.

A duo who have been in many VB@H issues and have occupied the Transmission airwaves on countless occasions, this showcase would not have been complete without Rylands Heath. You can set your watch by this band to always deliver, for Rylands Heath time equals a good time and make no mistake. With a telepathic understanding, Jack Cowan and James Deacon could well play their way into the history books alongside great pop writers such as Difford & Tilbrook and Neil Finn.

Having released one of DJ Matt Crawley’s favourite Eps this year with ‘Stuck In My Mind’, it comes as no surprise that Naked Next Door are joining the bill tonight and the Milton Keynes group bring the biggest lighters in the air moment with their arena sized sound. NND are newly signed to Honest Records and it’s clear to hear how easily they could trouble the mainstream with their Catfish & the Bottlemen / Kings of Leon influenced rock.

Time to put those dancing shoes on, for the grooviest band from Northants are about to turn the Edge into one giant disco ball. Of course it is headliners Sarpa Salpa, stopping off in Luton on their extensive ‘Before It Goes Dark’ tour. This is a band who have been awarded with Radio One and 6 Music plays of late and there is definitely no glass ceiling for the newly grown 5-piece. Along with a new keyboardist amongst their ranks, Sarpa Salpa take their sound to all new levels, perhaps it won’t be long until there’s a new fish shaped constellation, and if there is, then the stars will be dancing all around to its beat. It’s a sublime performance from Sarpa Salpa and there really are no limits.

A successful night full of talent draws to a close, leaving all present plenty to reflect on and to encourage a positive mindset that the local future is chock full of bands with so much potential. So much in fact that one night in the Edge is not enough, and so it will come to pass that a second showcase will take place…