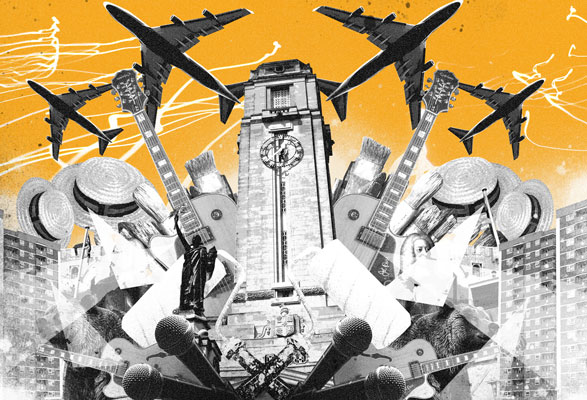 “You’ve got to have something to kick against.” Words of defiance from Arndales’ drummer Allen Arndale in a recent interview. There’s something serendipitous that a Luton band with that name has released a concept album called Shops – inspired by, and somewhat satirising, the bamboozling bullshit jargon retailers use to sell you rubbish you don’t need – at a time when the future prosperity and renewed pride of the town is being delayed by a London Shopkeepers’ Cartel. You may not have realised you need Arndales, but you do. We do. “Retail is detail” barks guitarist and singer Alan Arndale (they all answer to a differently spelled variation of the name) in a cutting refrain that closes No Existent. Except, in real life, the doom mongers are ignoring the will of the people, rendering detail an inconvenience.

Arndales, on the other hand are important, indispensable and impossible to ignore. In a first Shops-stocked hometown show, they display its inventory, a litany of lyrically curated retail drivel, over the bruising brilliance of tracks like In-App Refunds, Dark Store and Morning Goods. While Prestige Pricing is the practice of hiking up the cost of goods in order to give the appearance of quality, there’s nothing knock-off about the lead single of the same name. Its chorus of “guns, gold, radio controlled,” pilfered from a derelict Coventry shopfront that adorns their album sleeve, is bizarrely anthemic. All the while guitars crunch and thrash, bleeps steam from an ironing board and beats so loud they bring on the very real threat of tinnitus – earache has never sounded so good. Allan Arndale sifts through a well-worn stack of papers as he seemingly re-learns the songs during the short interludes between angular noise. It’s comical, but charming as their frontman jokes to younger members of Arndales customer base that these are perils of your 40s. But while short-term riffological memory loss could be the sign of the years catching up, harder to forget is the ability to rattle with relevance.

And it’s no mean feat on this bill, shaped on strong stuff.

Sara simmers with understated wonder, that is never, and probably never will be, part of the plan for Dois Padres. The Luton two-piece rampage, whooping and hollering, through Bullitt from their eponymous EP and the joy is relentless in the shape of banging debut album Welcome to the Thrillhouse. It’s easy to overlook just what kind of virtuosity exists in Danny Young and George Cowan cutting loose, improvisational at times, giving their instruments a darn good thrashing, until Chapel of Bones slows things down and demands attention. Set closer Twilight Zone crackles in the knowledge that, per capita, Dois Padres are the biggest, brashest, most untouchable hombres around.

Despite a monikered nod to hallucinogenically potent seafood, Sarpa Salpa’s experimentalism is more calculated and intricate, but no less intoxicating. They’ve created a monster that can be expertly tamed and set free at will by Marcus Marooth’s sonic boom. A big fish in a small room, the frontman’s voice soars and swoops around singles She Never Lies and Circuits.

But, against these three very different, but exceptional talents, there’s still something thrillingly visceral about headliners Arndales. Maybe it’s that, while they haven’t directly written a long-playing riposte to the preposterous retail ransom being held over their home, they have inadvertently soundtracked the fightback.

Luton has something to kick against.