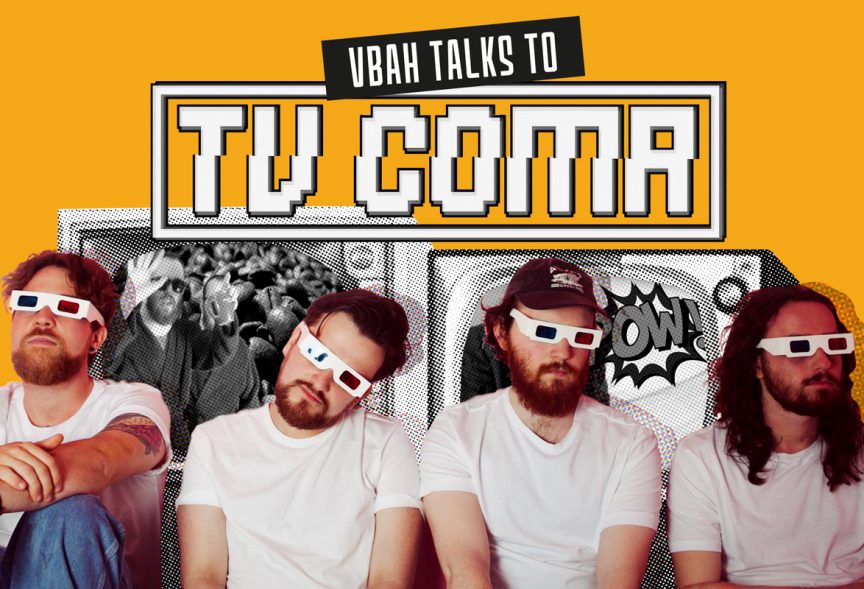 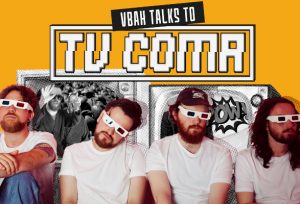 Hailing from posh old uncle St Albans, TV Coma have hit the local scene like a blizzard of songs erupting from an avalanche of tsunami like earthquake lightning tornadoes surrounded by a massive whirlpool. Yes, like that. And it was into this maelstrom that the good ship VB@H bravely plunged to shout some questions at the band in hopes they would respond…

TALK ABOUT HOW THE BAND GOT STARTED, HOW YOU ALL MET AND WHEN YOU REALISED YOU COULD WORK TOGETHER

We all met in a stagnant puddle of water off the side of the M25. Jamie (Jamie says Hi) was living there and me, Laurie and Leo found it when we were on one of our many runs. We climbed into the puddle and pulled Jamie out of the water and slime, as though he was a new born baby boy seeing the world for the first time. Out of the slime and into the harsh and confusing world, we looked up at the many lights of the city. We saw a billboard of Ed Sheeran and James Bay cuddling with some dogs topless and decided we wanted to become EXACTLY like them.

WHO ARE YOUR INFLUENCES? I CAN HEAR BLUR, WEEZER AND PAVEMENT IN THERE BUT ALSO BLOODHOUND GANG AND EVEN GORKY’S ZYGOTIC MYNKI WHICH IS AN ECLECTIC MIX.

We’re mostly influenced by the Director Pasolini (Salo, Accattone) and Fozzie Bear (The Muppets). We loved the faeces eating in the film Salo and think that’s how people must feel when they listen to our cool music. Fozzie Bear is great and has started getting great work in adverts for Facebook, he is so fluffy and a great inspiration to us all. We do also love all of those bands though, haven’t heard of Gorky’s Zygotic Mynki but just listened to them now and they sound great! 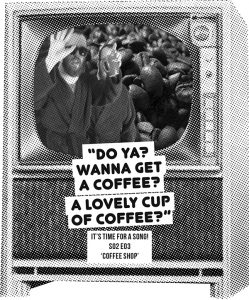 WHAT’S YOUR CREATIVE PROCESS? DO THE SONGS COME EASILY?

Usually we watch famous chefs on TV making carbonara then Jamie picks up a guitar and starts singing about carbonara, then we add some la la la’s and ba ba ba’s over the top and that’s it: a whole song.

‘It’s Time For A Song’ is a series of songs that we usually post up weekly in groups of 5. We make a song and video weekly for it and

sometimes it’s shit, but Coffee Shop and Water Song have ended up becoming some of our most popular songs, which is weird because

ARE YOU PLANNING TO RELEASE AN ELECTION THEMED SONG?

We were actually thinking of doing a cover of that great Mariah Carey Christmas Song but instead call it “All I Want For Christmas Is Brexit.” We are excited for Brexit because it will mean that we will never be able to eat shit food like pineapple and bananas because they

will be too expensive and we can all start living on a diet of potatoes and chips! That will be very cool and we will get so much energy from a really high carb diet!

YOU’VE FILMED VIDEOS FOR MOST OF YOUR SONGS. WHO COMES UP WITH THE IDEAS FOR THEM AND WHO DOES THE FILMING? 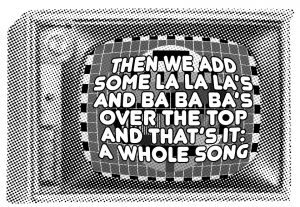 We film most of our videos on cool iPhone cameras and very bad DV cameras that we still have from about ten years ago. With the

ideas we usually just get a green screen and Jamie dances around in front of it then we put something in the background in post-production like coffee beans or hills and that’s it: a whole music video.

SO, WHAT ARE YOUR PLANS FOR 2020? WILL YOU TURN DIRECTLY TO FOOD FOR INSPIRATION OR WILL YOU STICK WITH LIQUIDS, DRINKABLE OR OTHERWISE?

For 2020 we’re planning on releasing our debut album and taking over the world with pure rock music. Instead of drinkable liquids we will be looking for inspiration in the stagnant puddle from whence we came, going back to our roots.