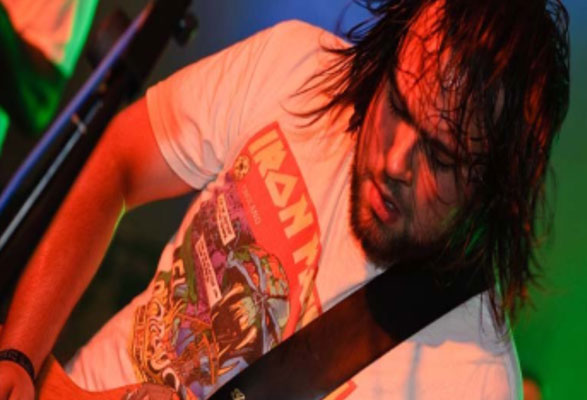 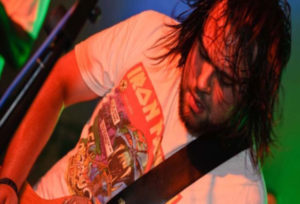 In my opinion it’s good news that this years Castlefest will be held here at the Carnival Arts Centre.

It’s roomy but not too roomy and the smaller room in particular is an excellent shape for gigs, a bit like a slightly smaller Esquires or a slightly bigger Horn. Luton Live/s have done a great job tonight, setting up a professional looking thrust stage that gives the singer plenty of space to prowl about and there’s even one of those guys who hold torches in their mouths and run on and fix things. I believe they’re called ‘techs’

Rousseau’s singer, one Jake Smith, is the kind of guy who was born to front a rock band. He’s tall, good looking, has great hair and can also sing and play guitar. The rest of the band aren’t too

shabby either sporting some epic beards and, despite the fact that, as they confess, they hardly ever play, they put on a solid show. I confess I’m not familiar with any of the bands they list as influences on their Facebook page, but Smiths vocals and the band’s style remind me a little of Soundgarden. A great opening band.

The King is Dead are a blur of energy and intensity. Mixing metal, punk and hardcore, great clothes and even bigger beards they come on like System of a Down at their most visceral and absorbing. Singer Omar is a really good frontman full of frenetic activity which perfectly suits the songs which are chaotically and imaginatively structured. They play an excellent set which doesn’t let up and I was really impressed. They’re mostly from Leeds so it’s unlikely they’ll be down this way again soon, but you can find their single ‘Trust No witch’ on their Bandcamp page. I’d advise you to give it and them a listen.

It’s a little surreal, given the rebirth of the VB@H fanzine that Charlie Indestructible are playing tonight. It’s like nothing has changed, or that time is cyclical, or something. Anyway, it’s great to see them playing again and they’re as good as you’d expect from such experienced musicians. While it’s not really my thing musically, they are nonetheless a really tight, professional band, if a little too polished sometimes. Mark Sowdens vocals are, as always, note perfect and Greg Niedzwiecki’s meteoric guitar work is as fantastic as I remember. It’s great to have them back

Back when I was a snotty Indie kid I used to hate dance music. That was until I went to a rave, took some pills and realised that it did all make sense after all. I’ve never been into metal that much and it genuinely intrigues me that fans of the genre are so passionate about it. What is it they truly get out of it? Tonight is the closest I have come to figuring that conundrum out. Wars are simply fantastic. Their distilled fury and power is overwhelming and captivating. It’s hard to describe the almost physical punch that the band delivers when the heavy bits kick in but it’s comparable to the euphoric rush that I experienced all those years ago in those hazy warehouses. My only complaint about the band is their tendency to include melodic singing sections in the songs, partly because it’s actually quite a cliqued genre move but mainly because it detracts from the sections where main vocalist Rob Vicars, who seems literally breathless with the effort, lets rip at the crowd with almost terrifying focus and rage. The band are electrifying and the sound is monstrous yet clearly defined and superbly dynamic. I loved it and, while I’m still not a total convert I think, finally, I am beginning to understand.